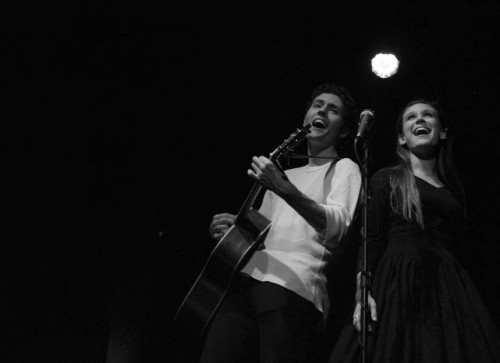 The Kensington Arts Theatre production of Rooms: A Rock Romance, is now playing at the Kensington Town Center.  Directed by Dani Stoller and Lenora Spahn, this ambitious production tells the story of the budding love between a pair of equally-talented musicians at the cusp of adulthood in 1970’s Scotland, when punk and new wave are the rage.  While the story covers only a short period of their lives (early twenties), both Ian (Eric Jones) and Monica (Madeline Botteri) manage to undergo several life-changing transformations both as individuals and as artists.

The brooding, solitary Ian and the starry-eyed, driven Monica meet over a collaboration for a song Monica wants to perform for a batmitzvah.  Although they are nothing alike, they both notice there’s an instant “click;” for now, though, they’ll keep it professional.  When it becomes clear they make a great musical team, however, Monica is taken up in the dream of success and drags Ian first to London, then Manhattan.  Along the way, they discover their feelings for each other, but also the way their very different needs, desires and musical endeavors have gotten entangled in “us.”  Changes in the world of the music industry and their environments seem to mirror the changes that are occurring between them, and within, and it is not clear if there is still a place in their respective worlds for the other… 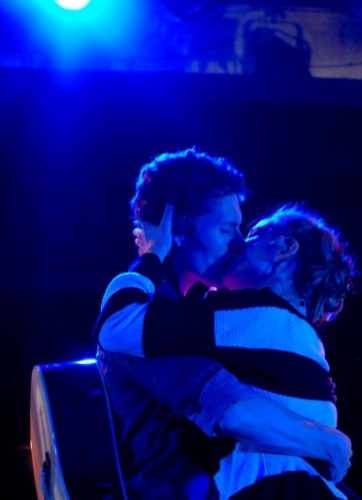 Rooms is a two-person show whose set is constructed around various “rooms” that make up Ian and Monica’s world: bedrooms, clubs, apartments, and stages.  The rooms are loosely but effectively constructed with the use of a door that is swiveled around the stage depending on the given setting.  Although we only ever see Jones and Botteri, their families, professional contacts and audiences are included and brought to life through Ian and Monica’s imitations of their parents, some telephone calls and sound effects.  In fact, their gesturing and physicality alone, especially during the performance numbers, create the vast world around them, while they always remain the focus.  A lively pit orchestra, doubling as a band at times, plays behind a darkened screen at the back of the stage.

At first glance, I had two reactions to going to see this show: 1) Sweet!  It’s a rock musical! And 2) Uh oh, looks like the same-old, same-old for storyline.  Afterwards, I found I had a lot to think about.  There is a wonderfully mature attitude of hope and determination that balances out the drama and angst, and none of these characteristics overwhelm the show.  The fact that the period covered in Ian and Monica’s lives is so short speaks to real life experience, and helps avoid the tendency that similar shows have of over-emphasizing periods of drama and tragedy.

Most importantly, however, the performances of Jones and Botteri are absolutely superb.  The instant they take the stage, these actors own it.  Botteri has a dynamic, infectious energy that never drops (she must be exhausted after each performance), and her voice is refined, clear and powerful in both the rock and ballad numbers.  Jones is complex as Ian, skillful and remarkably capable of being both a gentle complement to Botteri’s character and a compelling, forceful Ian when he is on stage alone.  Jones’s voice is a beautiful, soaring tenor, equally skilled, and even plays guitar onstage.  Both demonstrate in every moment of their performance that they are multi-talented, and they are remarkably well cast.

Overall, this production is professional quality, from stage to music to acting.  I enjoyed the performance a lot, and enjoyed coming away with many things to think about.  The humor, drama, optimism and love of Rooms is true-to-life and does much justice to the trials of various stages of adulthood. 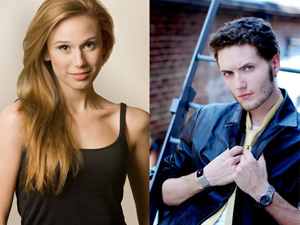 Eric Jones (Ian) is honored to be making his fifth appearance at KAT in this incredible show! A native of Frederick, MD, he was last seen here in Sunday in the Park with George (Soldier/Alex), Violet (Monty), and RENT (The Man et al. – 2010 WATCH Nomination for Outstanding Cameo). Other favorites: MET – The Eight: Reindeer Monologues (Donner), A Clockwork Orange (Minister of the Interior et al.); OOH – City of Angels (Stine); GS – The Triangle Factory Fire Project (Steuer et al.); GAC – Children of Eden (Cain/Japheth), The Rocky Horror Show (Frank-N-Furter). Eric has also worked as a dialect coach and makeup/hair designer, receiving the 2008 WATCH Award for his work on GAC’s The Rocky Horror Show.