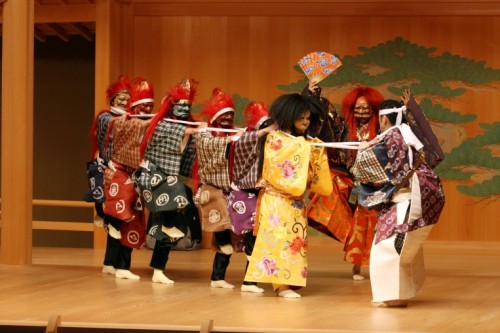 The Mansaku-no-Kai Kyogen Company is performing three traditional Kyogen works through this Saturday at Kennedy Center’s Terrace Theatre. Kyogen is a classical form of Japanese theater similar to commedia dell’arte. It is very stylized and fascinating to watch.

Artistic Director Mansaku Nomura who is a Living National Treasure in Japan and his company perform three Japanese folk tales during this program. 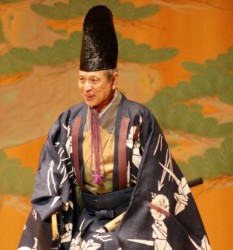 First is Suminuri (Black Crocodile Tears) which is about a lord (Yukio Ishida) who is about to return home after winning his legal suits in the capital. When he goes to say goodbye to his mistress (Hiroharu Fukata) he is berated for not seeing her in a while. What he comes to realize through his servant (Haruo Tsukizaki) is that the woman is faking her tears for effect and proves it to the lord. Guys does this sound familiar to you?

The second piece is by far my favorite because it features Nomura in action. Tsukimi-Zato (The Moon-Viewing Blind Man) is about an old blind man going for a walk to see the moon. He meets a man from Upper Kyoto (Kanzori Takano) who befriends the man and they drink sake together and ultimately end up feeling really good after ten cups. The Kyoto man turns on the blind man towards the end of the piece and does something you wouldn’t expect after seeing the two men drinking sake together.

Watching the Mansaku-no-Kai Kyogen Company perform this form of theatre is fascinating.

The last piece Kubihiki (Neck Pulling) deals with demons and a famed warrior named Tametomo (Shuichi Nakamura). When the demons appear and threaten to eat Tametono competition begins between Tametono and the demon daughter (Takano). 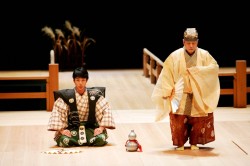 Watching the Mansaku-no-Kai Kyogen Company perform this form of theatre is fascinating. The set is a wooden floor with a backdrop of a Japanese landscape. The costumes are traditional style complete with some really funky demon wigs and masks. The lord costume will have you wondering what the actor is actually walking on. Is he on his knees the whole time or are those his feet? The company was very wise to have English supertitles over the stage. This made the action easy to follow and did not detract from the performers.

This is a true ensemble effort but Nomura deserves to be singled out for just being who he is and for helming the production. I totally understand why he is revered in Japan and for those of you that get to see this production it is a real treat to watch this master at work.

The Mansaku-no-Kai Kyogen Company is a highly recommended evening and yes, you can bring your kids to it. They will appreciate the costumes and the storytelling while you adults will get something else out of the evening too. It only runs through Saturday so go if you can and enjoy.

Running Time: 95 minutes including one intermission

The Mansaku-no-Kai Kyogen Company plays through May 19th, 2012 at the John F. Kennedy Center for the Performing Arts in Washington, DC.  For tickets to other theatrical productions at the Kennedy Center, call the box office at 202-467-4600/1-800-444-1324 or purchase them online.