Theatre Review: ‘The Music Man’ at Arena Stage at the Mead Center for American Theater 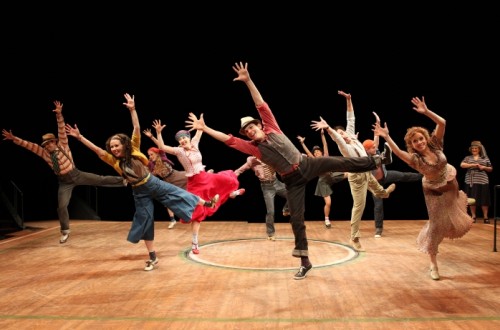 The cast of Arena Stage at the Mead Center for American Theater’s production of ‘The Music Man’ May 11-July 22, 2012. Photo by Joan Marcus.

With the start of summer and families looking for something to do together, the all-American Broadway classic, The Music Man is paying a visit to the Arena Stage.

The story concerns a con-man named Harold Hill (Burke Moses) who comes to River City, Iowa to con the town into thinking that he can teach the children to play musical instruments and form a band. While there he tries to win over the affection Marian Paroo (Kate Baldwin) who is the town librarian and piano teacher. In the course of the show you come to find out that Hill has been run out of every town he’s been in after taking everyone’s money. The question is can he win over Marian and become an honest man and also can he really put together a  band with his think system which is where you think the notes and you can play them. No practice or instruments are required. To find out the answers to these questions you will have to see the show. 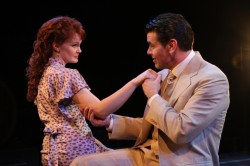 Kate Baldwin as Marian, the librarian, commands the stage from her first entrance. She does a wonderful job in the scenes with Hill and her performances of “My White Knight” and “Till There Was You” actually rival Barbara Cook’s originals.

Burke Moses as Harold Hill presents a different approach to the character than Robert Preston’s ‘bigger than life’ original. Moses plays him as a little more slimy than suave which at least for me did not work as well for the character. If Hill is going to convince these people that he can deliver on what he promises, then he needs to have more of a carnival barker approach. While I was not wild about Moses’s interpretation of the role, I did enjoy his vocal performances. Keeping in mind that Hill was never written for a legit singer, Moses’ trained voice wonderfully captures “You Got Trouble” and “The Sadder-But-Wiser Girl.”

With its highly energetic choreography and equally talented cast, the Arena Stage’s LIVELY production of  ‘The Music Man’ is the perfect show for families to go and enjoy together.

As Marcellus Washburn- who was Hill’s old accomplice, Nehal Joshi delivers a lively and comical performance and really shines in the exuberant dance number “Shipoopi,” energetically choreographed by Parker Esse. The motherly Mrs. Paroo is played by one of DC’s best actresses. That would be the one and only Donna Migliaccio. It is always great to see her in action and her performance is very heartwarming. 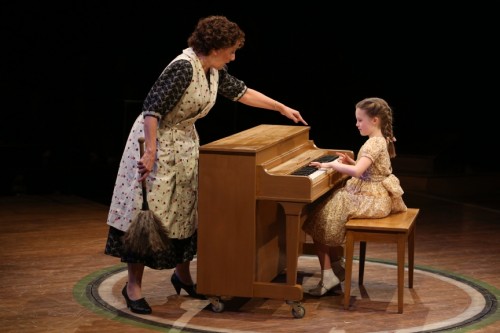 What would The Music Man be without kids? There are 4 very talented children in this show but two of them are the standouts. As Amaryllis, Heidi Kaplan gives us an endearing take on the character and holds her own against Baldwin in the song “Piano Lesson.” As the shy and lisping Winthrop Paroo, Ian Berlin does great with his song “Gary Indiana” and because he gets picked on a lot you can’t help feeling sorry for him. Both of these young performers have a great future ahead of them.

An honorable mention needs to go to Sasha Olinick’s comic timing as Charlie Cowell, an anvil salesman who has had too many dealings with Hill in the past. Also, John Lescault as the bumbling Mayor Shinn and his wife Eulalie Mackecknie Shinn, played by Barbara Tirrell deserve a shout out for their contributions. 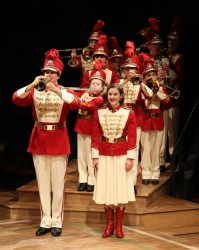 The cast of ‘The Music Man’ in their new band uniforms. Photo by Joan Marcus.

Meredith Willson’s score has become a classic with numbers such as “Seventy- Six Trombones” and “Till There Was You.” The lesser known songs are equally as brilliant and catch the mood of the period. The opening is a piece called “Rock Island” in which four travelling salesman do a patter number to the rhythm of a moving train. This was quite innovative in its day and is still a remarkable opening 55 years later. It is interesting to note that Wilson only had one other hit musical after The Music Man called The Unsinkable Molly Brown. His other two offerings were Here’s Love (based on Miracle on 34th Street) and 1491 which was based on Christopher Columbus sailing to discover America. That one never reached New York. One other fact that might surprise you is that The Music Man beat out West Side Story for Best Musical at the 1957 Tony Awards. Now that we’ve had our history lesson I’ll start to wrap this up!

Willson’s score is played by a nifty sounding 14 piece orchestra conducted by Lawrence Goldberg who also did some adjustments to DonWalker’s original and brilliant charts.

Arena Stage’s Artistic Director Molly Smith has directed the show with lots of energy and quick pacing which is good as this show has been known to run close to three hours on occasion. Eugene Lee’s minimal set design of a high school gymnasium draped with American flags around the theatre is a very good and interesting way to present this show which is usually scenery heavy. Likewise for Judith Bowden’s costumes which does include marching band uniforms and a host of period costumes.

With its highly energetic choreography and equally talented cast, the Arena Stage’s LIVELY production of The Music Man is the perfect show for families to go and enjoy together.

Running Time: Two hours and 25 minutes including one intermission.