Theatre Review: ‘The Taming of The Shrew’ at Folger Theatre 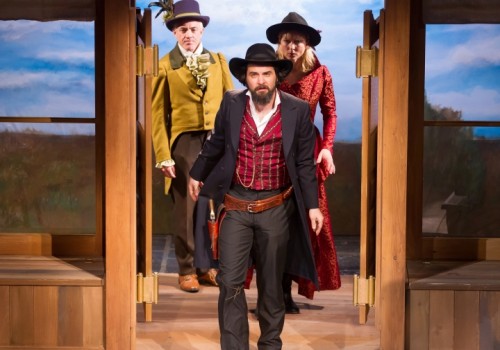 Danny Scheie, Cody Nickell, and Kate Eastwood Norris in Shakespeare’s 'The Taming of the Shrew' at Folger Theatre. Photo by Jeff Malet.

One of the great things about DC theatre is that the circle of actors and artists is considerably smaller than the scene in NYC. Because of this you can go to a show and see some of the greatest performers in DC all working together in the same production. This has been demonstrated this season already with 1776 at Ford’s Theatre and it is happening again with The Taming Of The Shrew at Folger Theatre. You know you are off to a good start when your program tells you that Holly Twyford, Sarah Marshall , James Gardiner, Craig Wallace and Marcus Kyd are in the show. Add to that a very welcome addition of musician Cliff Eberhardt and the always fantastic staging of Aaron Posner and you have a Shakespeare production that is a must see.

The main plot depicts the courtship of Petruchio, a gentleman of Verona, and Katherina, the headstrong, obdurate shrew. Initially, Katherina is an unwilling participant in the relationship, but Petruchio tempers her with various psychological torments—the “taming”—until she becomes a compliant and obedient bride.

The director, Aaron Posner in a stroke of brilliance has chosen to set his play in a saloon of the old wild west. This approach to the story works wonderfully and presents the characters in a interesting light. For example Petruchio (Cody Nickell) is portrayed as a scruffy gunslinger and Katherine Minola (Kate Eastwood Norris) the shrew that Petruchio wins is portrayed as an Annie Oakley rough and tumble character. By setting the show in this time frame it says that no matter what time period you set Shakespeare in it still works. Gunplay as opposed to swordplay says the same thing and the themes are timeless. 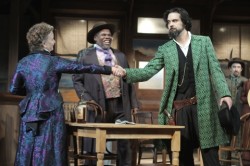 Performance wise this is one of the best Shakespeare productions I’ve seen in a long time. Sarah Marshall as Baptista, Kate’s Mother is a whiskey drinking gun toting businesswoman who is trying to marry off her daughters Kate and Bianca(Sarah Mollo- Christensen). Marshall is hilarious on stage and slings a mean rifle.

As Kate and Petruchio- Norris and Nickell’s chemistry is impeccable. Working off of each other like Cronyn and Tandy used to do on stage, their physicality and  choices are just what these characters need.

Then we have Craig Wallace as a rich suitor to Bianca named Gremio. With his rich voice and comic timing Wallace has turned a semi incidental character into a well defined person. Holly Twyford as Tranio shows off her comic side as a very clever servant to Thomas Keegan’s Lucentio (who will end up with Bianca in the end). It is always great to watch Twyford in action and in this piece we get to see her show off a few dance moves too (staged by Brianne Camp).

The ever young James Gardiner doubling as Biondello (Lucentio’s male servant) and Rafe ( a home servant to Petruchio) exudes youthful energy, expressions and comic timing which are always welcome on stage and it’s great to see him in a non- singing role this time ( thankfully he does get to sing a little bit….just saying).    I would be remiss to not mention Marcus Kyd as Hortensio (good friend of Petruchio and suitor to Bianca. With his dashing appearance Kyd turns a supporting role into a star turn for himself.

I want to give a very well deserved mention to Katy Carkuff who plays several small roles in the production, two of which are male. Carkuff, even with the limited time she has on stage shows us that she has great presence and is a joy to watch.

While many audience members will find Danny Scheie’s performance as Grumio, Petruchio’s flamboyant male servant very funny, in my opinion, his interpretation seems out of place with the wild west theme. 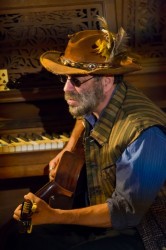 Cliff Eberhardt as The Blind Balladeer in Shakespeare's 'The Taming of the Shrew' at Folger Theatre. Photo by Jeff Malet.

Part of what makes this production so special are the original songs and incidental music composed and performed by musician, Cliff Eberhardt as The Blind Balladeer. Having worked with the likes of Richie Havens and Dar Williams, Eberhardt is an accomplished musician, though he has never done a theatrical production, until now. Audiences will enjoy his music which is a mix of funk and period western cowboy stylings.

Physical elements are superior too. Tony Cisek’s  two tiered saloon setting solves an inherent problem that the stage at Folger has, which is that it has two columns on stage as part of the building structure. Cisek made one of the columns part of the bar and the other was decorated so as it did not become an eye soar.

Helen Q. Huang’s costumes and Jennifer Schriever’s lighting help to add to our western feel with cowboy hats, long dresses and nice use of color and shadows.

It is always refreshing to see a modern take on a old classic. Aaron Posner and company do just that. This play is one for a modern audience without losing any of Shakespeare’s intent. With this cast and Posner’s production, this Taming of The Shrew will make your time at Folger a very enjoyable experience.

Running Time : Two hours and 30 minutes with one intermission

The Taming of The Shrew plays through June 10, 2012 at Folger Theatre, at The Folger Shakespeare Library which is located at 201 East Capitol Street, SE, in Washington, DC. For tickets, call 202-544-7077, or order them online.

WATCH a video about the production, produced by the Folger Theatre: