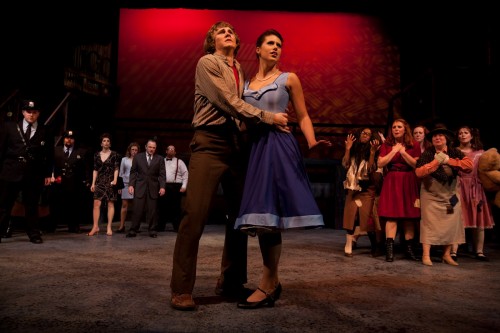 The cast of ‘Urinetown: The Musical’ at HCC’s Arts Collective. Photo by Nate Pesce.

“This is not a happy musical,” stated the show’s narrator rather candidly to the audience. “But it is a musical.” Indeed, Urinetown: The Musical, which is presented at the Smith Theatre by Howard Community College’s Arts Collective, confronts a variety of societal ills that lead to despair and tragedies. But these plot elements are treated so satirically that laughter from the crisp dialogue, the joyful musical numbers, and the spoofing of other Broadway hits like Les Miserables permeate throughout the show.

Urinetown: The Musical was a three-time Tony Award winner in 2002 (including Best Director, John Rando) with music and lyrics by Mark Hollmann and lyrics by Hollmann and Greg Kotis (both won Tony’s). Kotis also wrote the book where he drew his inspiration by backpacking across Europe on a tight budget and encountering a pay-per-use toilet. According to Jenny Male who directed the Arts Collective production of Urinetown: The Musical, Kotis “envisioned a world where a corrupt private company controlled all toilets to preserve water and ensure the continual flow of cash into its own pockets.”

Urinetown: The Musical opened on Broadway in September 2001 and finished its run on January 2004 after 25 previews and 965 performances. Yet it seems that the show is more relevant today than 10 years ago given the recent attention to income disparities (99 percent vs. the 1 percent) and increasing concerns over environmental issues—both paramount to the show’s plot.

Serious subjects aside, one cannot overlook the puns, plays on words like a company named “Urine Good Company” and silly character names, such as officers Lockstock and Barrel. And one cannot ignore the over-the-top characters that are so adroitly directed by Jenny Male and played by an extremely competent, high-energy cast that blends the talents of students as well as acting veterans. 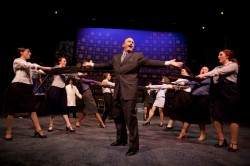 Ed Higgins as Mr. Cladwell and the cast of ‘Urinetown: The Musical’ at HCC’s Arts Collective. Photo by Nate Pesce.

The story centers on the plight of folks in an urban setting who are experiencing a 20-year drought. As such, all private toilets were banned in order to conserve what remaining water existed requiring the citizens to pay steep fees to urinate at public amenities including Public Amenity #9—the poorest and filthiest of them all. Those who cannot pay get dragged off to “Urinetown,” a mysterious place from which they never return. These urinals are run by a monopolistic corrupt corporation, Urine Good Company, led by CEO Caldwell B. Cladwell (Ed Higgins).

When fee hikes are enacted by Urine Good Company, the assistant to Public Amenity #9’s domineering operator Penelope Pennywise (Erin Branigan), good-looking, idealistic, young Bobby Strong (Dustin Merrell) leads a rebellion by the poor and kidnaps Cladwell’s beautiful daughter Hope (Katie Chase Martin), although he had fallen in love with her instantly. They believe in the power of their heart and hope for a new world.

As the serious plot progresses, the sight gags, silliness and parodies dominate. But through the comic mayhem, the harsh reality of the issues remain intact.

The songs are terrific throughout: “Mr. Cladwell,” “Cop Song,” “Follow Your Heart,” “Look At The Sky,” and “Tell Her I Love Her” are standouts. And Ed Higgins’ impressive rendition of “Don’t Be a Bunny” is a showstopper.

This production of Urinetown hit the target in so many ways. The young lovers—Bobby and Hope—played by Dustin Merrell (company member of the Red Branch Theatre) and Katie Chase Martin were outstanding in terms of vocal prowess and in their acting skills. In fact, the characters they portrayed were both included on New York Theatre Monthly’s list of “The 100 Greatest Roles in Musical Theatre.” By the way, Katie’s mom, Amy Chase Martin, plays the role of the greedy Senator Fipp.

Merrell has commanding stage presence and great acting instincts. He is a strong vocalist for the most part, but he seems to do better with the higher register.

Cory Jones as the show’s hilarious narrator and as the crooked cop Officer Lockstock was superb. He cleverly stepped out of character at various times to address the audience. His partner in crime (stopping), Gavin Shown as Officer Barrel, worked cohesively with Jones in a vaudevillian display in several scenes, and his character stunned the audience with a secret late in the show.

Ed Higgins as Caldwell B. Cladwell is wonderful in this role. He brings considerable theatrical experience to his performance and that polish shined throughout.

One observation, however, is that the more veteran the performer, the more likelihood he/she was able to project his/her voice. Some of the students in the company with less experience had uneven projection in dialogue and song. None of the cast were mic’d. 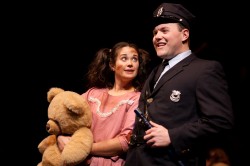 Keri Eastridge as Little Sally and Cory Jones as Officer Lockstock in ‘Urinetown: The Musical’ at HCC’s Arts Collective. Photo by Nate Pesce.

These energetic actors were able to deliver with such proficiency largely because of the brilliant direction of Jenny Male. The performers’ movements on the stage, dialogue and voice inflections were flawless and precise. You hear the expression “a well-tuned engine.” This production was well-tuned, and much of the credit should go to Ms. Male.

Ms. Male also choreographed the production, and just like the rest of her direction, the dancing was tight and flawless. Here is where several Broadway shows were parodied: Les Miserables, Chicago, West Side Story, and Fiddler on the Roof come to mind. The 6-piece orchestra conducted by Keith Tittermary was well in synch with the vocalists and dancers adding to the overall quality of this tuneful musical.

Costume designer Jessica Welch was quite creative in outfitting the actors that depicted the have’s and the have not’s. Several costumes were needed for some roles, and they were spot on.

And Set and Props Designer Ryan Michael Haase neatly devised a gritty-looking combination scaffold, platform and stairways that worked as the main set for the actors to romp around. The revolving turntable on the stage was effectively put to good use.

Urinetown: The Musical is a laugh-filled and extraordinarily well-staged production that satirically takes on serious matters including a reference to Thomas Malthus’ warning in 1798 that man will outstrip his resources because he cannot control his desires. Urinetown also parodies corruption, income inequality, municipal politics, and the legal system and does so with great wit and creativity.

Running Time: Two hours and 30 minutes. with one intermission.

Urinetown: The Musical plays through May 13, 2012 at The Arts Collective at HCC in The Horowitz Center’s Smith Theatre at Howard Community College, 10901 Little Patuxent Parkway, in Columbia, MD. For tickets, call 443-518-1500 or purchase them online.