1.   The Taming of The Shrew at Folger Theatre

Director Aaron Posner takes us to the wild west where it is anything but tame.

Synopsis: Shakespeare’s comedy The Taming of the Shrew pits the spirited Katherine against the fortune-seeking Petruchio in a quintessential battle of the sexes. Petruchio has agreed to woo and marry Katherine as a favor to his old friend Hortensio, who is in love with Bianca, Katherine’s younger and more popular sister. The younger sister can only be married after the older one, but Katherine has a notorious temper and thus far no man will have her… until Petruchio comes along to “tame” her. 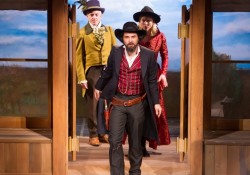 Danny Scheie, Cody Nickell, and Kate Eastwood Norris in Shakespeare’s 'The Taming of the Shrew' at Folger Theatre. Photo by Jeff Malet.

See why this play by Lynn Nottage won the 2009 Pulitzer Prize for Drama.

Synopsis: In war-torn Congo, Mama Nadi Keeps the peace between customers on both sides of the civil war by serving everything from coldbeers to warm beds. This shrewd matriarch both protects and profits from the women whose bodies have become battlegrounds “ruined” by the brutality of government soldiers and rebel forces alike. This play is inspired by interviews conducted in Africa. 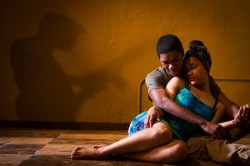 3. The Big Meal at Studio 2ndStage

Following one family through multiple generations, this play is relatable and enjoyable.

Synopsis: The Big Meal follows a young couple, Nicole and Sam, from first date to first fight, their first kiss to their newly wedded life at a single restaurant table. The years pass and Nicole and Sam start building their own family—a son and daughter—who come enthusiastically and then reluctantly to family meals at the restaurant. Sam’s parents visit and accompany the family on their big meal tradition. More years pass and the children become adults with families of their own, as other loved ones fade away. Both familiar and surprising, and observed with aching accuracy, The Big Meal shows a family in all their embarrassment and heartbreak. 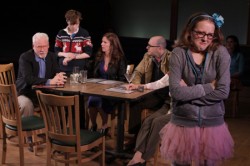 Don’t let the title of the play scare you.  This show is good, clean fun!  Well, as much as can be expected…

Synopsis: In this smart and hilarious satire of American business, no one – and no musical theatre genre – remains unscathed. Due to a 20 year drought, the poor are forced to scrounge for pennies to pay for the privilege to urinate. Bobby Strong has the courage to stand up to a tyrannical empire, rousing the poor with musical numbers that parody Broadway’s biggest shows. 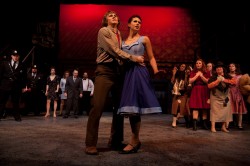 The cast of 'Urinetown: The Musical' at HCC's Student Arts Collective. Photo by Nate Pesce.

5. Working at The Keegan Theatre

If you could break into song at work, it would look like the musical, Working.

Synopsis: The hopes, dreams, joys and concerns of the average working American are the focus of this unique, extraordinary musical. That the everyday lives of “common” men and women should be so compelling and moving will surprise and inspire anyone who has ever punched a time clock. 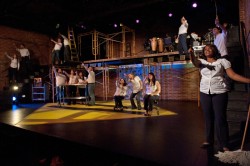 The cast of 'Working' at Keegan Theatre. Photo by Jim Coates.