You can’t stop the beat with Toby’s Dinner Theatre of Baltimore’s SENSATIONAL production of Hairspray!

Synopsis:  In 1962 Baltimore, Maryland, plump teenager Tracy Turnblad’s dream is to dance on The Corny Collins Show, a local TV dance program based on the real-life Buddy Deane Show. When Tracy wins a role on the show, she becomes a celebrity overnight. She then launches a campaign to integrate the show. Hairspray is a social commentary on the injustices of parts of American society in the 1960s. 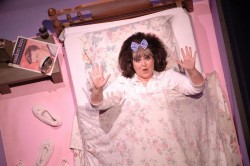 Looking for a play to take your grandchildren to?  Then take a trip to Adventure Theatre MTC!

Synopsis: Going shopping…baking cakes…sitting in trees…JUMPING ON BEDS!!! In this zany play, all in cumulative verse, five silly simian siblings insist on doing things their own way and-heedless of admonitions – much more monkey mayhem ensues. And maybe a call from a doctor. 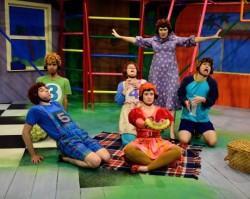 3. Crown of Shadows: the wake of odysseus at Round House Theatre

This is Round House Theatre’s Producing Artistic Director Blake Robison’s last directorial effort before leaving at the end of this season.

Synopsis: This gripping, modern take on The Odyssey uses contemporary language and leanings to paint a chilling portrait of the family the warrior leaves behind. Penelope and her teenage son Telemachus struggle to maintain control on Ithaca while waiting for Odysseus to return. As Penelope navigates the political waters of countless suitors, Telemachus, in his turbulent youth, chafes against both the bombardment of potential usurpers and his father’s legacy. With pressure for a successor mounting, they battle two outsiders for control over the island, with a shocking ending that can’t be found in Homer’s saga. 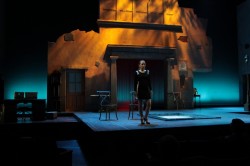 Julia Proctor (as Calliope) in Round House Theatre’s production of 'Crown of Shadows: the wake of odysseus.' Photo by Danisha Crosby.

4. Mary Poppins at the Hippodrome

While it is not “practically perfect in every way,” like Mary Poppins, herself; this show has an amazing set, outstanding dancing, and lots of good music.

Synopsis: One of the most popular Disney movies of all time is capturing hearts in a whole new way: as a hit Broadway musical! Come experience the enchanting mixture of irresistible story, unforgettable songs, breathtaking dance numbers and astonishing stagecraft that makes this the musical that soars high above the rest. Believe in the magic of Mary Poppins and discover a world where anything can happen if you let it!

5. The Whipping Man at Theater J

Interesting characters in a historical tale of secrecy and honor.

Synopsis: The story takes place during Passover. Why is this night different from all other nights? For three Richmond Jews—one a former Confederate soldier, two his former slaves—gathered around a makeshift Seder table at the close of the Civil War, age-old questions of justice and freedom find new and surprising answers. 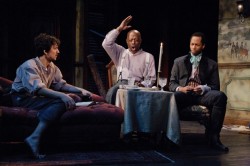