‘A Quick 5’ with Dylan Moore 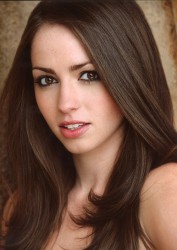 Dylan Moore is currently performing in Bachelorette at The Studio Theatre where she plays the prescription drug addicted matron of honor, Regan. Recently Dylan had a reoccurring role in the hit CBS show Blue Bloods with Tom Selleck. Dylan made her Off Broadway debut as Cressida in The Age of Iron at Classic Stage Company and was most recently seen in In Memory of Julie Simmons at Ensemble Studio Theatre. She can be heard on the radio in many Coca-Cola spots. A recent graduate of The Juilliard School, Dylan performed there as Helen of Troy in The Greeks: Part 3, Molly in Farragut North, Lady Anne in Richard III, and Phoebe in As You Like It. She is a member of The Mechanicals Theater Group in Los Angeles. If you get to see Bachelorette take note of Dylan’s performance. It’s a very honest portrayal and one that I won’t forget seeing. Welcome to DC Dylan Moore. Hope you come back soon.

I started acting as kid in Los Angeles, where I grew up, when I was 5 years old. In 5th grade I began to audition professionally, and over the course of a year I was in several national commercials and in a film. They were great experiences, but I realized I wanted to have a normal childhood, so I stopped auditioning after the film until I graduated from Juilliard.

You had a reoccurring role in the TV series Blue Bloods which stars Tom Selleck. What is the biggest difference between shooting a TV series and performing in a stage production and do you prefer doing one over the other?

The difference between TV and theater is huge. They are both difficult and wonderful in their own ways. On TV there is very little, if any, rehearsal time. So it’s up to you as the actor to make the best choices for your character. The actor is one piece in a huge puzzle going on all around you. In the theater, the actor has a lot more say in how the storytelling comes together. Rehearsal is the most important part of the process. That’s why I’ve always been inclined to the theater. I love rehearsal and I love a live audience. There’s nothing like it! 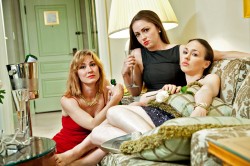 Can you please describe the character you play in Bachelorette?

From the outside, my character in Bachelorette is the villain, the Regina George of the play if you will. However, Leselye has written such intricate and complex women that to reduce any of them to such a simple archetype would cheapen the experience. I love playing Regan so much because all of her anger, her meanness, and her narcissism comes from a place of deep and powerful self-hatred and pain. She hates others because she hates herself. I think any woman can connect to that. When you are in high school you make fun of someone else because you are scared you may be like them. She has this great little speech about how being 12 years old is the worst because that’s when you begin to hate yourself. Any woman who remembers the horrors of middle school can relate to that!

What do you want audiences to take away with them after seeing Bachelorette?

This play is great because I don’t think it has a singular message it wants the audience to walk away with. The play is a mirror. It mirrors contemporary life but more importantly mirrors the ways humans deal with pain and sadness. The way we cover up who we are or what we’re really feeling out of our deep fear that you are the only one who feels that way. That isolation and inability to connect is the fatal flaw in these characters. I hope people see the wasted potential of such smart and charismatic women. I hope people walk out of the theater and compliment a stranger.

After Bachelorette what are your next few projects?

Next up, I’m back to New York! The next project is still around the corner.