‘A Quick 5’ with Emily Behny 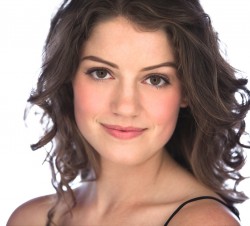 Emily Behny is currently on tour with Beauty and The Beast in the lead role of Belle which is on stage for the next two weeks at the National Theatre. Stage credits include: God’s Ear, The Bald Soprano, Violet (Young Violet), The Sound of Music (Liesl), Once Upon a Mattress and The Wild Party (Nadine). Originally from Silver Lake, IN, Emily is a graduate of Ball State University, B.A. in Musical Theatre. This is Emily’s first national tour and as you will read she is having a ball touring the country.

Did you perform a lot in high school and college?

High school was when I found my niche performing in theatre. I was very shy and insecure so theatre was a way for me to express myself and find belonging with others. I guess you can say, I was bit by the bug, as they call it during my time in high school theatre, so I auditioned for just about every production there was and had a blast playing roles like Joanne in Gosdpell, Mame in Auntie Mame and Rapunzel in Into the Woods. My high school theatre teacher and director Dana is still one of the biggest inspirations for my decision to pursue musical theatre as a profession. She gave me some of my first opportunities to act! As for college, I first attended a small Christian school, Grace College, and was extremely involved in their productions. They didn’t have a theatre major at the time, but I was at the theatre day and night, and it was during my sophomore year that I decided to transfer and study musical theatre at Ball State University. I had been doing Liesl in Sound of Music at a nearby regional playhouse and I came to the conclusion that there was nothing I would rather invest my heart and soul in, than theatre! My director at Grace, Mike Yocum, also inspired and encouraged me to pursue musical theatre and prompted me to audition at Ball State. At Ball State, I performed almost every semester, in mainstage shows, student directed shows, and student films, though I never quite nailed a leading role. My senior year I had the amazing opportunity to perform in Chicago, LA and NY in our showcases, giving me exposure to industry professionals, and in the end I secured an agent out of NY. My time at both colleges was invaluable as I was able to apply material that I was learning in classes to my character work on stage. 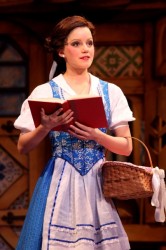 You are currently on tour as Belle in Beauty and The Beast. Is this your first time touring?

This is indeed my first time touring! It is actually a job of many firsts..my first professional role out of college and it is my first dream role that has come true!

As a little girl who was your favorite Disney heroine?

As a little girl, I actually really loved Belle. I loved all the Disney princesses, but Belle was my favorite! I think I liked Belle’s spirit the most, that she stood up for what was right and of course I admired her songs and singing voice. I also was a huge fan of dress up and imaginative play as a little girl, so I was in awe of Belle’s beautiful yellow gown, I actually had one very similar to it! So you can imagine what an honor it is to be playing the character that I so admired as a little girl. It is quite something.

As we all know kids say the darndest things .What is the funniest thing a child has said to you after seeing you play Belle?

I have met so many memorable children in my year stint as Belle, that’s one of my favorite parts of the job! But, one that stands out, would have to be Ms. Anna Claire, from Memphis. I think she was 3 going on 20, and in the best southern accent she asked me at the stage door: “Booty (she couldn’t pronounce Beauty), will you sign my book please?” I signed it..then she immediately said: “Booty, can I have my pen back?” And..”Booty, did you really kiss the Beast?” To which I replied, yes I did, and she said: “You can kiss him.” She gave me permission to kiss the Beast! She was just so adorable and clearly knew what she wanted from Belle.

What is your favorite role that you have played thus far?

I don’t think any role comes close to Belle. I did play Young Violet from Violet the musical in college at Ball State and I think that would probably be my second favorite role I’ve ever played. I think Belle takes the cake though!

Beauty and the Beast plays at the National Theatre from June 12-24.