‘A Quick 5’ with Heidi Kaplan 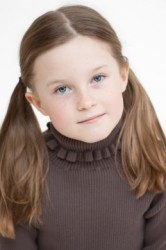 Heidi Kaplan is currently playing Amaryllis in Arena Stage’s production of The Music Man. Heidi is a Maryland resident in the third grade and is nine years old. While this is her debut at Arena Stage, Heidi’s other area performances include Gretel in the Helen Hayes Award-nominated production The Sound of Music at Olney Theatre Center, Molly in the Helen Hayes Award-nominated production of Annie, also at Olney Theatre Center, and Tootie, the youngest daughter of the Smith family, in Montgomery College Summer Dinner Theatre’s production of Meet Me in St. Louis. For a performer so young Heidi holds her own on stage against her adult counterparts and if you get a chance see her in The Music Man you will be very impressed.

What was the first role you ever played on stage?

I played Molly, the youngest orphan in Annie at the Olney Theatre Center. I had never auditioned for anything before, so I was super excited when they offered me the part! Olney is a very professional theater, so we worked really hard to make it a great show. Before that, I didn’t know how much I would love acting, but now I know that this is what I want to do! I like to make the audience laugh, and Molly is a good part for that. My mom still cries when she sees me on stage.

You performed in The Sound of Music as Gretel at Olney Theatre Center? What are some of your memories about working on that production?

I loved coming back to Olney to play Gretel. Some of the same people worked on Sound of Music from Annie, so it was like being back with old friends. Some of my favorite things: when I first saw all of my amazing costumes; being directed by Mark Waldrop again; the funny nuns. my not-so favorite memory: I fell on the steps just before my entrance in the final show and both of my shins were bruised and bleeding, but I just told myself, “Heidi, don’t let the audience know. You can cry later.” so that’s what I did–cry backstage between scenes. My mom was there so she helped take care of me. 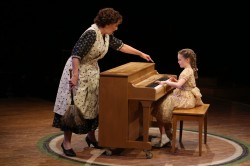 You are currently playing Amaryllis in The Music Man at Arena Stage. The first time we see you in the show you are getting a piano lesson. Do you play any musical instruments?

I learned some piano for this show before we started rehearsals, and since I play a boy in the boy’s band, I learned a little bit about how to play the flute. We only had 3 weeks, and I could barely get any sound to come out of the flute, so I just “pretend play” instead. I sing all the time at home and when I’m outside playing, so I guess you could say that my voice is my instrument.

When not performing what do you like to do for fun?

I like to make mud and play in the dirt with my next door neighbors. I have lots of good friends in my neighborhood, so we go swimming and play American Girl dolls a lot. Sometimes I make up plays and we perform for our moms. I just started rock climbing, and it’s my new favorite sport. I can always find something fun to do!

What are your top 3 favorite things about being in The Music Man?

Being at Arena Stage is kind of like a dream come true. I get paid to learn from Broadway stars, have fun with my friends, and be on stage! I like the days when we have two shows with a long break in-between. There’s a great duck pond near the theater with mini islands where we like to run around and make up games. I have beautiful costumes and everyone is so nice and professional! I told Molly Smith that I am so thankful to her for changing my life!