‘A Quick 5’ with Leslie Kritzer 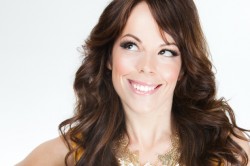 Leslie Kritzer is currently wowing audiences in First You Dream:The Music of Kander and Ebb at Kennedy Center. She was recently seen in DC at Shakespeare Theatre Company in The Boys from Syracuse. NYC Credits include A Catered Affair, Legally Blonde, Hairspray, Sondheim on Sondheim, Rooms and Godspell. Other regional credits include, knockout star turns as Fanny Brice in Funny Girl and Rizzo in Grease (both at Paper Mill Playhouse) and POP! at Yale Repertory Theatre. Leslie also has a one woman show called Leslie Kritzer is Patti Lupone at Les Mouches which has recieved rave reviews (no surprise there). I am also proud to say that Leslie and myself are from the same hometown of Livingston, NJ. It’s so nice to see a hometown girl hit big and Leslie has definitely done that. I am honored to know Leslie as an artist and as a friend. You have until Sunday to catch Leslie and the rest of the cast at Kennedy Center.

Growing up in our hometown of Livingston, NJ did you know that performing was going to be your chosen profession?

Yes, I did. I kind of made my mind up my senior year of high school that I wanted to study musical theater. I applied to several schools and wound up going to CCM. I just had that laser focus on what I wanted to do.

After graduating from Cincinnati Conservatory of Music, what was your first professional job?

My first professional job I would say was Godspell Off-Broadway. It was my first real show in NY and was an amazing experience.

You were featured in the Broadway musical A Catered Affair which I think got a bum rap in NYC. Why do you feel the show was underappreciated?

I think the show was not what people were expecting to see with the cast we had assembled. I think they thought it was going to be an over the top comedy. It was funny but it was moving, poignant and I think a very important piece of musical theater. I found it to be probably one of the best theatrical experiences of my life. After that experience, I really understood why some shows don’t make it even if they really are gems. It’s not that a show is bad. It’s just not for everyone. 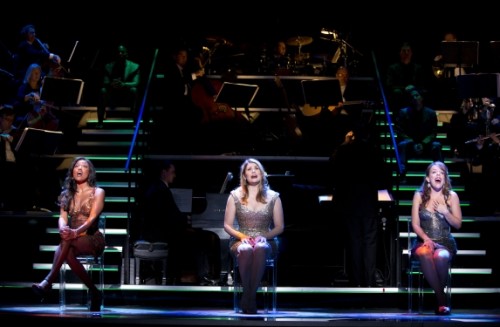 Patina Miller, Heidi Blickenstaff and Leslie Kritzer in the Kennedy Center production of ‘First You Dream: The Music of Kander & Ebb.’ Photo by Joan Marcus.

You performed in the review Sondheim on Sondheim and now are in First You Dream: The Music of Kander and Ebb. These are some of Broadway’s best writers. Which are your favorite songs written by each?

There are too many. That would be a college thesis! I will pick two for each. For Sondheim, the two that come immediately to me are “Now You Know” and “Beautiful.” “Now You Know” is special to me because I had the opportunity to perform it in Sondheim on Sondheim. Stephen actually wrote new lyrics when I did it so I feel like I was part of musical theater history when I got to do that number. It was a really special moment for me. The lyrics in that song really sums up I think who I am as a person in my life now. That is why I’m so drawn to it. I think it was the right song at the perfect time for me. I quote it all the time. “Burn your bridges, start again, you should burn them every now and then or you’ll never grow.” The quotes go on and on. It’s the perfect song for me. It’s just totally who I am. The song “Beautiful” that I had the thrill of watching Euan Morton and Barbara Cook do every night, is truly a masterpiece. That is all I can say about it. Everything about it is just perfect. They were just perfection together in that show. The relationship they had onstage together was unreal. It is something you can’t analyze. The song and performers meet and elevate it to another realm. It sounds corny, but it was almost a spiritual experience. Truly an honor to be able to be there for that.

The Kander/Ebb songs I love most are the ones I’m doing right now in the show. “I Don’t Care Much” and “Money Tree.” “I Don’t Care Much” was a song I’ve always loved and wanted to do. David Loud’s arrangement is so haunting and beautiful. I love the lyrics and the vibe. It is just gorgeous. “Money Tree” is just a real woman’s song. A song for a woman who knows what the reality of the situation is with her man and still hopes and still knows that it’s going nowhere. God, it is just so good. I have to say, I love doing it. I love it because I’ve been there. I’ve been that woman. It’s just a difference to sing a song with some experience behind your belt. I just own it.

After you finish First You Dream: The Music of Kander and Ebb at Kennedy Center, where can we see you next?

I’m here and there and everywhere. I’m doing a NYMF show in July called Letter to Harvey Milk and on July 30 I’m doing my Hello, Gorgeous! Jule Styne show at Barrington Stage.  Then I will be doing my own solo shows again around the city and maybe in LA. We shall see. I’m always doing stuff. Very lucky to be busy. Follow me on twitter @lesliekritzer and I will keep you updated.