‘A Quick 5’ with Matt Farcher 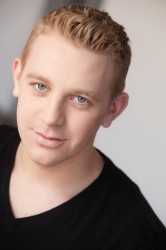 Matt Farcher is currently playing Gaston in the tour of Disney’s Beauty and the Beast which is at The National Theatre through this Sunday. Previous stage credits include Myths and Hymns and a new musical based on Treasure Island. Matt’s singing voice knocked me out at Beauty and the Beast as did his acting portrayal of Gaston. At age 22 he is on his way to having a very successful career. If you get a chance check out Matt’s performance. Maybe Gaston is not lovable but Matt Farcher as Gaston is thoroughly enjoyable.

Where did you get your training?

I studied BFA Musical Theater at Pace University in NYC. I loved every second of it!

Prior to Beauty and the Beast what other musicals have I performed in?

Well this is my first tour (if that’s the intended question) but I was privileged to be a part of the original collaboration of Myths and Hymns (by Adam Guettel) off-off Broadway this past January -February! I was also part of the original reading of Treasure Island a new musical by Brett Smock which will premier next spring at Arkansas Rep. In school and through school I got to be a part of other amazing pieces as well, such as Floyd Collins, The Who’s Tommy, South Pacific, and Damn Yankees among others as well! 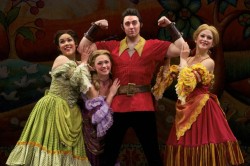 Matt Farcher as Gaston with the Silly Girls. Photo by Jack Stephens.

How would you best describe your character in Beauty and the Beast?

Gaston has a one track mind. He makes a decision to do something and does it without thought of consequence for himself or others. There is no being embarrassed because he does everything right. In his mind things happen around him because they should! Which ultimately, in my mind, makes him harmless and lovable. He doesn’t try to be mean or funny…he just does or says something and then the thought no longer exists in his mind. He simply does and there isn’t much regard for how it might or might not sound or come off. He just wants things his way and simply because he feels HE deserves it, not that others don’t. He just matters more, his one track mind allows him to only think about himself.

What is your favorite Disney musical?

As in movie musical? Probably, the Hunchback of Notre Dame…with Aladdin (Robin Williams as Genie really) in a close second. I love rooting for the underdog, but on top of that, the hunchback becomes a hero to himself throughout the whole story. At the time of being a kid though…it won me over with “Out There” where he slides on the water till he almost falls off the building, instead he sings his face off with no regard for who might hear him! He’s a big kid!

Well comparatively I haven’t seen nearly as much country as the other cast members (but I will)…but I was always that road trip kinda Guy, so was my family; so I love it! We (my family) were trying at one point to visit every MLB stadium before my dad was 50. Now I’ll get to see almost at least 30+ states and as many theaters before I’m 22….I couldn’t be happier. The truth is though the people who help you get through it all make the adventure what it is. My family, my girlfriend, friends from home, school, and the cast really make every second worth being a part of it all! So thank you to all of them!

The NETworks touring production of Beauty and the Beast plays at the National Theatre, 1321 Pennsylvania Ave NW in Washington, DC through June 24, 2012.  For tickets, call Telecharge at 1-800-447-7400, or purchase them online or at the box office.