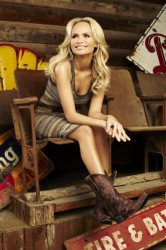 In 1999, as we did every year, my little sister and I watched the Tony Awards together.  Growing up in Syracuse, we didn’t really get a chance to see many shows, so watching Broadway performers on television each June was always a treat for us.  That year, one particular performer, who won a Tony that night, stole the telecast for us.  My sister, then a preteen, fell in love with Kristin Chenoweth’s performance of “My New Philosophy” from You’re a Good Man Charlie Brown and I did too.  That moment sparked our following of Ms. Chenoweth’s career- seeing her together in concerts, in the television productions of Annie and the Music Man, and on Broadway in Wicked, and Promises, Promises.  Her current “Some Lessons Learned” concert tour, named after her latest album release, reflects her diverse and interesting career on stage and screen and showcases her unmatchable talent.  Ms. Chenoweth’s concert at the Hippodrome Theatre on June 9, 2012, was quite possibly one of the best constructed and performed concerts I’ve witnessed in many years.

The Overture, played beautifully by a small orchestra conducted by Mary-Mitchell Campbell (Music Director), featured music highlights from Ms. Chenoweth’s career thus far as images of her in various roles were displayed on a large screen.  That eclectic mix was only the start of a concert which would feature showtunes (contemporary and traditional), country music, inspirational music, and several pop hits- a little something for everybody.   Every song was sung with exquisite precision and demonstrated Kristin’s extraordinary vocal and song interpretation range.   Additionally, each selection highlighted one aspect of Kristin as both a person and a performer.

Every song was sung with exquisite precision and demonstrated Kristin’s extraordinary vocal and song interpretation range.

Several highlights deserve mention.  Kander and Ebb’s musical masterpiece, “Maybe This Time” (Cabaret) and Boublil and Schonberg’s “Bring Him Home” (Les Miserables) were the standout showtunes of the night.  While “Maybe This Time” was performed with reckless abandon (complete with a piercing high note as a climax), “Bring Him Home” featured tender and restrained vocals.  Even in a concert setting, Kristin was more than capable of performing the songs with emotional intent and demonstrated a thorough understanding and appreciation for the context in which the songs are usually performed.  Taking on Sally Bowles and Jean Valjean in one night is no small feat. 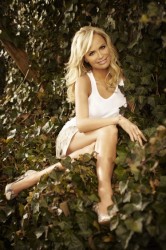 Three other songs, not drawn from Broadway shows, also made this a concert to remember.  “Upon This Rock” (originally performed by Sandi Patty, who possesses a similar vocal range and tone) allowed Kristin to feature her Christian faith and love for Jesus.  It was a bold choice to include it and I was glad she did.  It brought me back to my own Baptist church upbringing and I fully appreciated her introspective (yet technically impeccable) rendition of a well-known song.   The closing number, “I Was Here” (featured on her latest country-pop album) was performed with much conviction.  “What Would Dolly Do?,” Kristin’s love letter to Dolly Parton, featured unstoppable energy and exuberance.

No Kristin Chenoweth concert would be complete without at least one number from Schwartz’s Broadway blockbuster Wicked.  In a genius move, Kristin performed Glinda’s self-indulgent number, “Popular,” in English and several other languages- including Japanese!  Nine years after she originated the role of Glinda on Broadway, she more than proved she can still get the laughs with her rendition of the song.  The concert also featured “For Good.”  One lucky young audience member was chosen to duet with Kristin on this song.  Although this method of performing the song could have detracted from the rest of the audience’s enjoyment of Kristin’s high quality vocals, it did serve to solidify Kristin’s commitment to encouraging young performers.

That night, Kristin demonstrated that she belongs on the stage.  Backed by incredible musicians (including Damien Bassman on drums, Brian Hamm on bass, and Chris Alaways on guitar) and three talented vocalists (Will Taylor, Chelsea Packard, and Tyler Hanes), Ms. Chenoweth exuded charm, charisma, and personality.   Her concert, directed by Richard Jay-Alexander, should not be missed as it features new material for longtime fans as well as the well-known songs that made her an inspiration to aspiring musical theatre performers across the country.

Running Time: Two hours and 20 minutes, including an intermission.

This concert was a one-night-only event at Baltimore’s Hippodrome Theatre.  A list of Kristin’s upcoming concert tour dates can be found on her website.