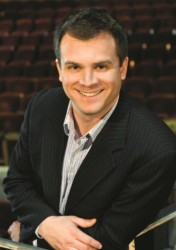 After a seven-month national search process, which considered more than 100 candidates, the Round House Theatre’s Board of Trustees announced today that it has named Ryan Rilette as its new Producing Artistic Director.

He will assume his full-time duties on August 1, 2012, replacing Blake Robison, who leaves at the end of June after having led Round House for seven years to become Artistic Director at Cincinnati Playhouse in the Park.

“Blake’s announcement last fall gave the board the critical time it needed to reflect on what we do well, what we can do better, and where we can grow,” said Sally J. Patterson, President of Round House Theatre’s Board of Trustees. “We are proud to be in Montgomery County, to provide innovative and challenging theatre, and to continue our commitment to artistic engagement for all ages. Ryan embodies our greatest hopes for all our aspirations.”

With 13 years of arts management experience, Rilette is currently the Producing Director of Marin Theatre Company in the San Francisco Bay Area. Rilette is also currently the President of the National New Play Network, the country’s leading alliance of theaters that champions the development, production, and continued life of new plays for the American theatre.

“It’s a great honor to follow in the footsteps of Blake Robison and Jerry Whiddon,” Rilette said. “I’ve long been a fan of both Round House and the DC theater community, and look forward to working with the board and staff to guide Round House through the next phase of its illustrious history.”