The Crucial Role of Community Theatre 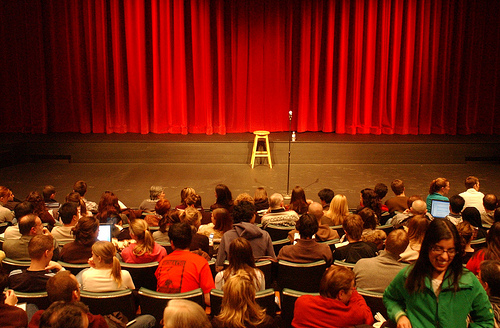 While there is no doubt Maryland, DC, and Northern VA all have a thriving theatre scene, according to the National Endowment for the Arts theatre audiences across America have been on the decline for several years now. All sorts of causes for dwindling audiences have been cited, from the recession, lack of federal support for the arts, to a lack of regard to quality drama by critics and the media and too much emphasis on grand Broadway type musicals.

However, decline in theatre audiences is not just something that is affecting America, as it is becoming a worldwide problem. Even in London’s West End, once a powerhouse for live theatre and a place many actors from these shores have visited to trade their craft, has seen a drop, not just in audience numbers, but also in the number of actors wanting to perform in West End productions.

In the UK, as well as in the United States, the decline in theater attendance has coincided with a drop in the number of local theatre groups. Community theatre has struggled to maintain interest, not just from audiences, but also from actors. The number of Americans taking part in community theater productions is continually decreasing, and this decline is causing problems for the entire theater industry, affecting the number of actors in live theatre and also, some claim, the quality of performances.

Community theatres in America have a long and proud history. There was a time when a new production would see people lining up by the hundreds to audition for a role in the latest local production. However, many theatre groups across America now struggle to find enough actors to fill the parts for many productions, especially in plays requiring large casts. This limits the type of productions these groups can put on, which in turn is putting audiences off, who are growing tired of the same old productions.

Path to the profession

Part of the problem is the path many actors are taking now. Community theatre used to be the first stepping-stone to a career in live theatre. Actors would learn their trade on stages of America’s community scene, and build their reputation the hard way. Now, many actors are side stepping community theatre and going straight from drama school and arts classes into paid performances. One of the reasons for this is that many of these young actors are leaving drama class already equipped with a theatrical agent. Of course, as agents make their money from a share in an actor’s fee, you can’t blame them for wanting to get their prodigies onto a paying stage.

However, agents have now replaced the traditional method of how actors built a solid reputation. Because the task of reputation management is now in the hands of the agent, young actors don’t have work as hard early on to build their reputations, which dilutes the quality of acting, or so one esteemed British actor claims. Sir Ian McKellen, perhaps most famous for portraying Gandalf in Lord of the Rings is also one of the world’s most revered stage performers. He has been reported as saying that the decline of community theatre or “amateur dramatics” as it is known in Britain, is damaging the craft because actors are no longer learning their craft the way they used to.

It is not just acting that is suffering because of the decline in community theatre, either. Community theater was a great launch pad for new directors, producers, writers and set designers, where they could learn their art from the bottom up.

Perhaps most importantly, community theatre is also the bedrock where audience interest is generated. Interest in live drama needs to start locally. If Americans are not attending local performances, featuring people in the community they may know, there is little chance they are going to become interested in live theatre, so when a national touring repertory company comes to town, they struggle to fill seats.

Community theatre acts as a foundation for all aspects of American theatre, and unless the decline is reversed, the future of live drama could be a bleak one. Many of the great stage plays that have been a staple of the American arts scene for generations could be lost, as theaters either close, or just put on big production musicals.