Theatre Review: ‘A Little Night Music’ at The Arlington Players 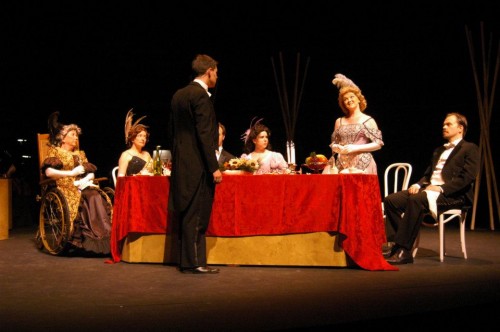 “Enchanted” is the word that came to mind, coming out of The Arlington Players’ production of A Little Night Music.  A Sondheim musical performed rather less often than some of his others, this production, directed by Christopher Dykton, is simply magical; and it’s not too late to see it, as it is now playing at the Arena Theater until June 17.

A Little Night Music is a whimsical “dramedy” that frankly portrays several intersecting love triangles and liaisons in which the players range in age and experience from barely adult to mature middle age.  The offhanded treatment of sex, scandal and infidelity is made all the more comical with the story’s setting in turn of the century Sweden, a time of elaborate collars, gloves and other Edwardian coverings. 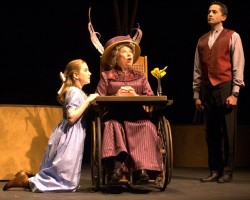 The complications begin with the entrance of the middle-aged Fredrik Egerman (Brent Stone) and his eighteen-year-old wife, Anne (Ann Coffman), who enjoys teasing Fredrik’s would-be priest of a son, Henrik (Scott Harrison), a little too much for a new stepmother.  It becomes clear during Fredrik’s number, “Now,” that after eleven months of marriage, he is still waiting as patiently as possible for consummation, which Anne continues to promise will come “Soon.”

Fredrik’s patience is tried, however, when he takes Anne to a play to see the famous Desiree Armfeldt (Heather Friedman), a past lover.  In his loneliness and frustration, he returns to Desiree later in the evening, looking for friendship and a little more, all the while insisting that she must meet his wife.  But Desiree has not been idle herself; her current lover is a hot-headed, arrogant and completely misogynistic dragoon, the Count Carl-Magnus Malcolm (Hans Dettmar), who incidentally carries on his affairs in full view of his own wife the Countess (Carmel Ferrer/understudy Janet Van Albert Replogle), and sometimes goes so far as to employ her help.

…The Arlington Players’ production of “A Little Night Music“ is an exquisite delicacy of musical theater that you will want to savor to the very last note.

These trysts and trials are only the tip of the iceberg, however, for even Henrik and the Egerman’s maid, Petra (Anne Marrie Pinto), have some excitement, as well as a butler who captures Petra’s heart in the country.  Desiree’s mother, the wealthy and stately Madame Armfeldt (Jannifer Strand), meanwhile, entertains her granddaughter Fredrika (Camille McDermott) as best as she can with bits of wisdom about a woman’s gifts as she laments the decline of the “tasteful” liaisons from her own time.

There are many pieces that make this production beautiful in its whole presentation.  The set design by Russell Kopp is deceptively simple, created by pieces of curved platforms that open up to double as beds, night tables and benches as needed, and which create depth on the stage.  It is lovely to have the orchestra present in the background the whole time, contributing to the atmosphere of listening to a nocturne under the moonlight, made more complete with the stories of the various characters.  The costuming by Grant Kevin Lane is exquisite and detailed, as are the set pieces and props that make up a dinner feast. 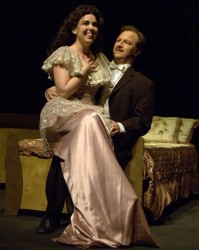 I was most impressed by the vocal talents of the actors and actresses.  Usually when I go to see a Sondheim production, I anticipate losing a lot of the witty word play in the songs, but the vocalists all did a phenomenal job of handling complex text, even at the tops of their ranges.  Notable performances, particularly on the musical side, include four characters who seem to serve as narrators and observers of the events without being involved, listed as Mr. Lindquist (Mike Usowski), Mrs. Nordstrom (Jennifer Jacobsen), Mrs. Anderssen (Nikki Arbiter-Murphy), Mr. Erlanson (Joseph Wilson), and Mrs. Segstrom (Jean Koppen).  I found this quintet of characters confusing as far as storyline, but they were wonderful to listen to nonetheless.

Friedman is beautiful and poised in her rendition of “Send in the Clowns,” easily one of the most poignant moments in the show if not the most.  Strand is endearing and hilarious as Madame Armfeldt, Stone believeable and warm, and Coffman and Harrison, if a little cartoonish, powerful and gifted vocalists whose rare talent bordered on operatic.   Pinto shown during her solo, “The Miller’s Son,” showcasing Petra’s character with incredible energy.  The young McDermott gave an excellent portrayal of a child who is used to being surrounded by adults talking about adult things.  Regrettably, there is no way to do justice to all the performers, let alone the production team.  Suffice it to say The Arlington Players’ production of A Little Night Music is an exquisite delicacy of musical theater that you will want to savor to the very last note.