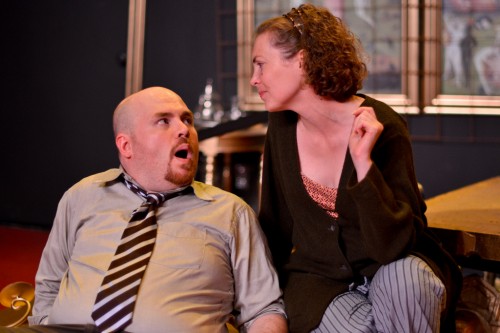 The production of Bobby Gould in Hell, written by David Mamet and presented by the American Ensemble Theater at the Capital Hill Arts Workshop, left me with a new vision of Hell, and I enjoyed the burn.

Bobby Gould (played by Slice Hicks) finds himself in Hell, and he is on the hot seat for two reasons.  First, he’s looking for his ticket out of Hell before his condemnation begins.  Second, his death just interrupted the Devil’s sacred fishing trip.  The Devil (Anthony van Eyck) is off the clock and wants nothing more than to get back to his rest and relaxation, and to do that the Devil needs Bobby’s soul signed, sealed, and delivered as fast as possible. 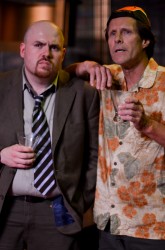 Bobby Gould (Slice Hicks) reflects on why he finds himself in hell, with The Interrogator (Anthony van Eyck). Photo by Chelsie Lloyd.

Helping the Devil along the way is the Interrogator’s Assistant (Mikael Johnson), who is very entertaining to watch. Johnson’s well-placed physical comedy adds new dimensions to the Assistant’s character and helps a very serious situation move along with humor to light its way.

Hicks is extremely convincing, portraying Bobby as an “everyman” in a sticky situation and in way over his head.  As he waffles back and forth between angered confusion and desperation to just go home.  I found myself rooting for his ascension, especially after a visit from his hyper ex-girlfriend, Glenna (played by Liz Dutton).

Glenna accuses Bobby of seducing her with lies and of threatening her (sexually) with a toaster, both of which Bobby initially denies.  Dutton plays Glenna with such lush stridence that we easily see why the Devil eventually begs her to just leave.  While Dutton is earnest enough to evoke some sympathy for Glenna (a not insubstantial feat), Glenna remains more a jumble of impulses than a coherent character.

With lively acting, a stimulating set, and a fiery story line, ‘Bobby Gould’ is one hell of a ride and should not be missed.

David Mamet’s renowned style of writing, or “Mamet Speak”, is abundant in Bobby Gould in Hell.  His distinctive dialogue is written for effect and often gives his characters a wise, cynical edge.  Van Eyck and Hicks are adept at handling Mamet’s hard-edged style of dialogue.  Their Devil and Bobby banter interrupt each other with realistic aplomb.  Van Eyck also riffs off linguistic gems with a range reminiscent of Robin Williams’ Genii in Disney’s Aladdin. 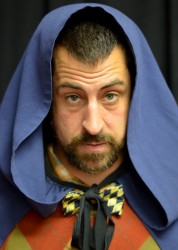 Mikael Johnson as The Assistant. Photo by Chelsie Lloyd.

Steven Royal’s fascinating set design reminded me of Dorothy’s farmhouse after she got caught up in the twister and landed in Oz.  Piles of gold-painted household objects, smashed and random, litter the stage, and the main stage door leads to the fires of Hell or the white lights of home, depending on the outcome for Bobby’s soul.

Paired with Bobby Gould in Hell is a Charles Lindbergh monologue called “Navigating Turbulence”, written by the American Ensemble Theater playwright-in-residence, Zachary Fernebok.  Matthew Sparacino plays Lindbergh with a touching enthusiasm for flying and for his time with his son and then shifts easily into a deep sadness and profound regret when faced with his personal truths.

With lively acting, a stimulating set, and a fiery story line, Bobby Gould is one hell of a ride and should not be missed.

Running time: 75 minutes, with no intermission.