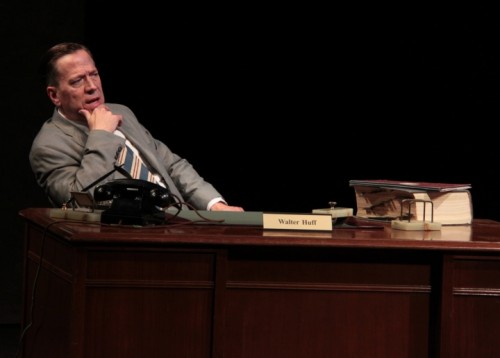 What do you get when you mix murder by broken neck, suicide by statistics, seduction by deathwish, and cynicism by claims adjuster?  Answer: the Round House Theatre’s East Coast premiere of Double Indemnity.  If, however, you are expecting the Double Indemnity made famous by the 1944 classic noir film with Barbara Stanwyck and Fred MacMurry, you’ll be surprised.  This adaptation by David Pichette and R. Hamilton Wright takes its audience back to the original James M. Cain’s serial-turned-novel.  In the process, however, the adaptation removes the guts of the drama, leaving us laughing at the spoof but scratching our heads at the why for.

Written during the dark days of the Great Depression and set in the early years of Hollywood, that place  that most epitomizes our modern world, Cain’s Double Indemnity fuses high morality with existential despair.  The story’s lonely insurance salesman protagonist follows his lust for the sultry femme fatale only to have the whole cosmos land on his (and her) head.  Where Cain’s crime drama is a confessional—the tome of a guilty cynical conscience pushed to the brink of despair—the tone of this modern version is light and sardonic.  It is as if a dear old uncle sat us down over a bottle of sherry to tell us he’s murdered our sister and buried her in the backyard.  As he asks us if we want another glass, we might just burst out laughing. 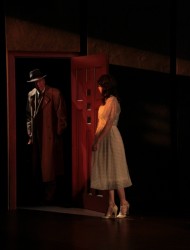 In their 2011 take on the tale, Pichette and Wright still give us the cigarette puffing agent Huff, played with wry wit by local legend Marty Lodge, and the seductive Phyllis, played by the hauntingly charmed Celeste Ciulla.  They still give us the ghastly murder and the odd plot twists, generated for the most part by the antics of the insurance industry and its claims adjuster, Keyes, robustly played by Todd Scofield.  They still give us Phyllis’s no nonsense oilman husband, Nirlinger, also played by the versatile Scofield, as well as Lola, Nirlinger’s daughter, played by Molly Cahill Govern with a deceptively simple bad girl innocence, and her scoundrel of a lover boy, Nino, played with stylish hipness by Danny Gavigan.  What Pichette and Wright do not give us, however, is enough of an emotional throughline to make these characters and their stories move us.  As a result, although we can take pleasure in the characters and in the way the actors share them with us, we cannot ground them in anything that might resemble a visceral human motivation.

To be sure, there are moments when the audience is left giggling in disbelief at a mountain of suicide statistics or at a wife’s sincerely emoted claim that her husband might be better off dead.  Unfortunately, however, those moments are too often surrounded by a tale stripped of its sinister underbelly.  We see Huff’s intelligence and understand his desire to beat the insurance industry at its own game, but we never get a chance to experience his loneliness and lust, a vicious combination that would have surely driven him to risk everything.  We see Phyllis’s not so subtle seduction of Huff and equally obvious desire to have her husband die in an accident; but not until the final scene are we allowed to experience this femme fatale’s serial-like desire for death, a desire which has supposedly left a trail of bodies across several states.  Thus, when the first act ends with Huff’s wonderfully insightful “that’s all it takes, one drop of fear, to curdle love into hate” we are left wondering: if we had witnessed the love or the fear, then that line might reverberate throughout the intermission.  Instead, Huff’s prime motivation is more rooted in his desire to undermine and punish the insurance industry than to win the heart, or the body, of the woman he loves. 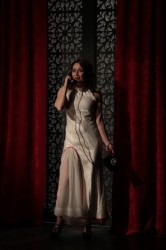 What is not lacking in this production, however, is visual stylized splendor.  Director Eleanor Holdridge has handled the production’s noir style deftly, carefully choreographing each scenic picture and modulating the script’s uneasy light-hearted tone.  We can delight in the iconic poses, the what-next glances, and the cigarettes shared—all seemingly lifted right off the silver screen’s noir past.  Holdridge has also handled the script’s multiple settings and scene changes with grace, not just managing them fluidly but finding a way for them to enhance the production’s stylized world.  Daniel Conway’s set and projections capture marvelously the Hollywood atmosphere of multiple illusions, while Kathleen Geldard’s costumes immediately place us on a 1930s film set.  Even more spectacular, however, is Nancy Schertler’s lighting, which not only captures the story’s intensity but at times magically creates additional characters through the manipulation of shadow.

The adaptation of the novel to the stage, or to film, is never easy.  The novel’s narrative voice allows its audience to enter the story as an intimate participant.  When Billy Wilder and Raymond Chandler tackled Cain’s novel for the now famous film back in the 1940s, they succeeded because they could combine their rival expertises–Wilder’s for film’s voyeuristic witness and Chandler’s for prose’s psychological depth.  What this production of Double Indemnity lacks is that comparable psychological partner.  Although we enjoy the theatrical style and flare, and take pleasure in the wonderful showmanship, we are left wanting the psychological substance; and without that, we are left to ponder why for?