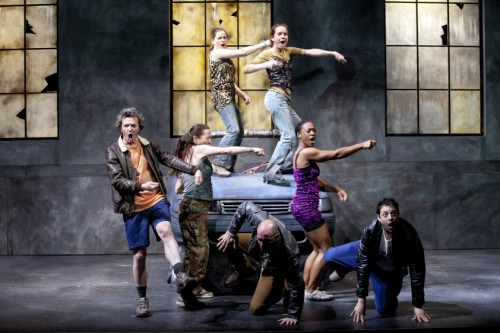 The cast of ‘Mr. Burns, A Post-Electric Play.’ Photo by Scott Suchman.

In the past I have been accused of not getting to the point and just saying what I mean to say on this site. After seeing Mr. Burns, A Post–Electric Play at Woolly Mammoth Theatre, it looks like playwright Anne Washburn has the same problem (at least with this script).

Her idea is a very good one, that being how do seven people survive after the power grid crashes and there is a nuclear holocaust. They keep books with the names of missing loved ones with them in the hopes of finding them after the disaster. How do you keep your mind off of a big event like this?  Well, you talk about past episodes of the iconic TV series The Simpsons, of course.

The cast of  ‘Mr. Burns, A Post–Electric Play’ work together as one unit and, dare I say, might have created some of the best ensemble acting I have seen so far while living in DC.

The second part takes place seven years later as a theatre company rehearses for a reenactment of a Simpsons episode in a empty performance space that use to be a warehouse. Because there is no budget and no props left, their special effects consist of someone hitting two erasers together for smoke effects and pouring water into a metal bucket to create the sound of running water. Again, this is survival of the fittest, which is what I think the main story is about. What happens at the end of this section, you will have to see the show.

The last section takes place 75 years later as we see a Simpson-like musical being performed in which the sinister Mr. Burns returns to kill Bart Simpson. Now you may be asking “how does all of this tie together” and I am telling you, “I don’t know.” This is the problem I have with this show. If Ms. Washburn would have stuck to her basic story without weighing it down with all the Simpson references it would have been much more enjoyable for me to watch. 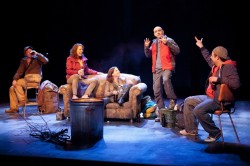 The cast of seven does do a fine job of putting the material over. I am going to mention all of them together as they play multiple roles. In alphabetical order we have Chris Genebach, Kimberly Gilbert, Amy McWilliams, Erika Rose, Steve Rosen, Jenna Sokolowski and James Sugg.

The characters portrayed include the main characters from The Simpsons to just regular people trying to survive after a horrific accident. The cast of  Mr. Burns, A Post–Electric Play work together as one unit and, dare I say, might have created some of the best ensemble acting I have seen so far while living in DC.

Steven Cosson has directed the show at a good clip and Michael Friedman’s post apocalyptic scoring for the musical section (accompanied by Jonathan Tuzman) adds a nice touch to the production.

Physical elements all do what they are supposed to do. Misha Kachman’s settings range from a post meltdown locale in the woods to a Simpson-like setting for the musical later on. Colin K. Bills’ lighting shows off the grittiness of Mr. Kachman’s work by never making things bright and the old time footlights used in the musical add to the design. Frank Labovitz’s costumes range from Simpson mockup head pieces to general post apocalyptic garb.

With a great ensemble and good production elements Mr. Burns, A Post-Electric Play is worth seeing. You will how ever have to wade through the convoluted writing of Anne Washburn to get to the real meaning of this show. D’OH!!!

Running Time : One hour and 55 minutes including a brief pause between parts one and two and one intermission between parts two and three.