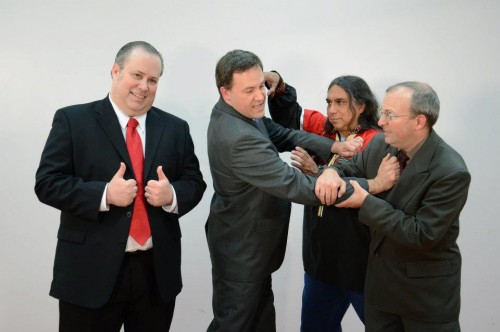 How fitting that Dominion Stage is producing David Mamet’s political comedy, November during a presidential election year. With the entire play set in the Oval Office, this satire depicts one day in the life of President Charles Smith, the beleaguered American commander-in-chief. Though it is only just days before the nation will vote, President Smith has plans for one last publicity stunt in order to try to win his bid for reelection.

The show was as funny and as entertaining as it was thanks to the talented cast and good staging by Director T.J. Keiter.

In casting the role of the president, Mr. Keiter ‘voted’ for actor Dave Wright. Similar in stature to Rush Limbaugh and equally as loud and intimidating, Mr. Wright is successful in depicting a man who is desperately trying to win back the support of his constituents, even though his own speechwriter, Clarice Bernstein (Aimee Meher-Homji) has already written his concession speech. 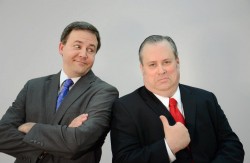 Baffled by his low poll numbers, President Smith asks his trusty Chief of Staff, Archer Brown (James Senavitis), “What is it about me that people don’t like?”  Not unkindly, Archer Brown answers by saying, “That you’re still here.”

To try and raise his poll numbers, President Smith manipulates the mild mannered and meek Turkey Representative (Gary Cramer) into spending millions of dollars in order to buy TV time so he can convince the public that he is a sensative, turkey-loving man. Mr. Cramer was particularly good with his role because he not only made clear character choices, but the audience also saw his character evolve as the situations he was put under became more and more ridiculous.  In other words, the man was funny!

Endorsing his idea to pardon all the turkeys in the US with support that all Americans should eat tuna instead on Thanksgiving is Chief Dwight Grackle (Michael Nephew).  His support doesn’t come without a price.  In exchange for his support, Chief Grackle is promised to get half of Nantucket Island returned to the tribe so they can build a new casino and hotel resort.

“There are no solutions, there are only rearrangements of problems,” says President Smith.  Speaking of problems…  A few problems abound, not in Dominion’s hand in the production, but with the script itself.  The satire often gets swallowed-up in the far-fetched storyline about a President threatening to cancel Thanksgiving if he doesn’t receive 200 million dollars. 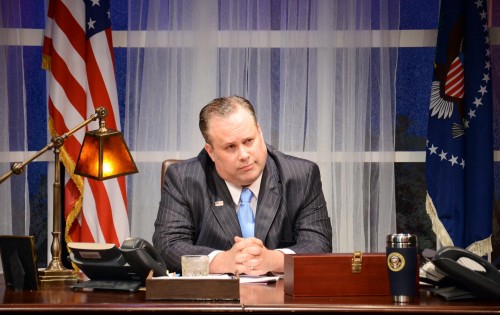 There were also jokes that seemed worn-out before they could even reach the punch-line.

Archer Brown: “We can’t build the fence to keep out the illegal immigrants.”

Archer Brown: “You need the illegal immigrants to build the fence.”

Even though some of the lines and storyline might not be too impressive, the Set Design by David M. Moretti and Prop Design by Marcia Carpenter are spot on!  The Oval Office has a huge window with desk in front of it.  Hanging white objects to symbolize the White House exterior also added to the set.  The detailed props include a mug with the Presidential seal and an American flag and Presidential flag that brought the whole look of authenticity together.

While some of the jokes were as stale as Aunt Ethel’s apple pie, the good ensemble of actors and the terrific set and detailed props will keep you entertained, even though the sometimes turkey of a script might leave you exiting the dinner table with indigestion from the implausible storyline and foul-mouthed language.

Advisory:  This play has excessive vulgar language and is not suitable for young audiences.

November plays through June 16, 2012 at Dominion Stage at Theatre on the Run, 3700 South Four Mile Run Drive, in Arlington, VA. For tickets, purchase them online or at the door.