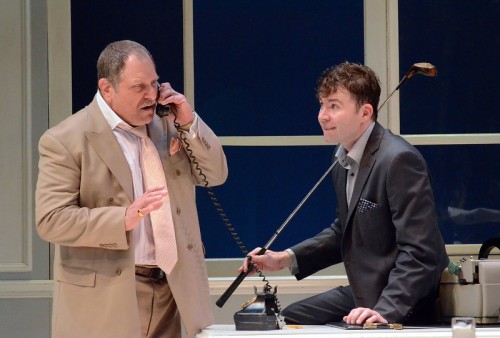 Sleuth opened on Broadway in November 1970 at the Music Box Theater and ran for 1,222 performances. Shaffer adapted the play into a film in 1972 starring Laurence Olivier and Michael Caine and then another film adaptation occurred in 2007 with Michael Caine and Jude Law as the co-stars.

The stage version at Olney was blessed by having casted talented pros Bob Ari who adroitly played Andrew Wyke, a well-healed, snobby British mystery novelist, and Jeffries Thaiss as Milo Tindle, a somewhat naïve London travel agent of modest means.   They are magnificent as the two combatants in a deadly game of intellectual cat and mouse.

Both actors play off each other with incredible synchronization. No wonder. They are seasoned actors and both were superb performing together in Olney’s Witness for the Prosecution last fall. Thaiss has also appeared in many other Olney productions including The 39 Steps, Is He Dead?, The Glass Menagerie and Dinner with Friends. 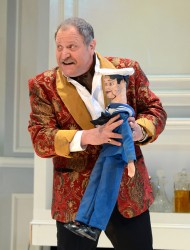 Ari has considerable Broadway experience having been in Frost/Nixon, Bells Are Ringing, Laughter on the 23rd Floor and a host of others. Ari and Thaiss have acted in television series.

In his program notes director Petosa quotes the late Harold Pinter who wrote the screenplay for the 2007 film adaptation of Sleuth: “There are no hard distinctions between what is real and what is unreal, nor between what is true and what is false. A thing is not necessarily either true or false; it can be both true and false.”

That is the essence of this Agatha Christie-ish whodunit. The audience must try to figure out and discern reality from fiction. Andrew (Ari) loves to play games and as it turns out, so does Milo (Thaiss). Shaffer had said that his friend composer Stephen Sondheim had an intense interest in games. This inspired him, in part, to develop the Wyke character.

Drawing on his experience as a successful mystery novelist whose world view mirrors his 1930’s characters, Andrew induces Milo, who is the lover of his wife Marguerite, to visit his stately country abode in Wiltshire. Having been burdened by his boring, loveless marriage and Marguerite’s excessive spending, Andrew devises a scheme whereby Milo can keep Marguerite for himself and Andrew can be free of her bills and enjoy his own mistress, Thea.

‘Sleuth’ is a cleverly written, well-directed, brilliantly acted play that will keep the audience wondering if what they witnessed was real or just part of the game.

Since Milo is experiencing financial difficulties, the scenario Andrew lays out appeared tempting: Milo would stage a burglary and steal Marguerite’s jewelry worth 900,000 pounds in cash, tax-free, and can fence the merchandise to solve his money problems. Andrew would defraud the insurance company by reporting the loss.

What happens next is a labyrinth of startling twists and turns encompassing friendship, deception, degradation and payback, and for the benefit of the readers, it is wise not to divulge anything more. Suffice to say, the gamely competition between the two, the battle of wits, the unexpected surprises all play out deliciously keeping the audience guessing each step of the way until the very end.

Petosa propels these two men into constant motion. Every inch of the stage is occupied by the dramatic exchanges that are not only dominated by snappy British retorts but are also heart-pounding from the relentless movements of the actors.

Scenic Designer Cristina Todesco (The 39 Steps, Farragut North, Opus) brings back to Olney her creative skills in designing the visually appealing, modern-style set, which represents Andrew’s ornate office. At the core is a diamond-shaped stage with a square-section floor including a perimeter that has a light marble effect. 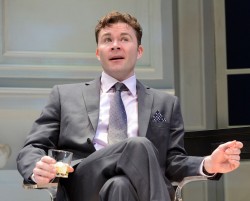 A very tall window in the rear is surrounded by ivory walls with built-in shelving to house liquor and glasses, antique figurines and books. A black table containing the ancient Egyptian board game Senat to symbolize the recurring game theme rests at the center of the stage.

Daniel MacLean Wagner, Olney’s resident Lighting Designer since 1986, applies his craft for dramatic, sometimes startling effect. When the mood changed, the blues and greens in the lighting subtly envelop the stage. Then they would shift back to bright white with precise timing.

Sleuth is a cleverly written, well-directed, brilliantly acted play that will keep the audience wondering if what they witnessed was real or just part of the game.