Theatre Review: ‘Souvenir: A Fantasia in the Life of Florence Foster Jenkins’ at Vagabond Players 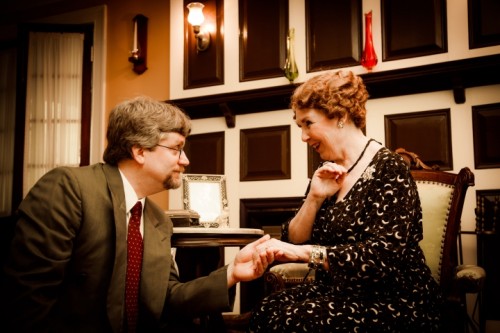 Today, if we want to watch terrible singers make fools of themselves in front of a live audience, we can watch American Idol. In the 1930s, the socialites of New York had Florence Foster Jenkins, a widowed dilettante whose aspirations for opera singing were only tempered by her complete inability to sing.

Brown’s sense of expression, theatricality, and comedic timing are excellent… 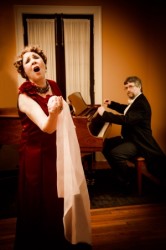 Possessed of what McMoon tactfully calls “a certain want of accuracy,” her initial burst of discordant sound is startling in its hilarity. Brown’s sense of expression, theatricality, and comedic timing are excellent, especially during Mrs. Jenkins’s Carnegie Hall performance, where she emerges in one part clothed in full military regalia brandishing a (firing) rifle and singing “Praise the Lord and Pass the Ammunition.”

Of course, this would not even exist as a play without its narrator. Farquhar intersperses the whole of the performance with pieces of live piano, and he never misses a step. In his soliloquies he addresses the audience with a charming intimacy and wry self-deprecation that sustains the show between Mrs. Jenkins’s acts of audacity.

As far as technical issues, there were few. The sound editing was perfectly on cue, and the set design was fabulously art-deco, with the play’s title revealing itself like an old film title across a misty blue New Yorkskyline. The antique gramophone, the framed photograph of the late Mr. Jenkins, the black baby grand piano—all are redolent with the taste of a 1920s Ritz-Carlton suite. I will say, however, that the very few set transitions were slightly distracting, as the dim spotlight on Mr. McMoon was not dim enough to discuss the several trips the tech crew made removing furniture.

Souvenir, led by Roy Hammond’s talented direction and two fantastic actors, is a riotous story made more ridiculous by being true.

Souvenir: A Fantasia On The Life of Florence Foster-Jenkins plays through July 1, 2012 at Vagabond Players, 806 S. Broadway Street in Fells Point, in Baltimore, MD. For tickets, call the box office at 410-563-9135, or purchase them online.