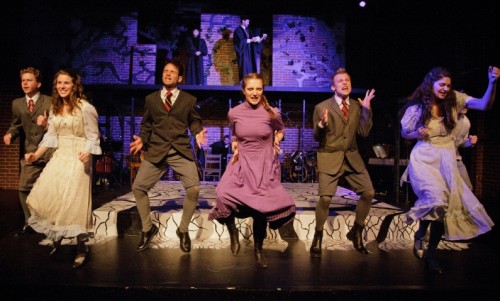 Spring Awakening at the Keegan Theatre is a highly unusual show; it is based upon a play written over a hundred years ago by Frank Wedekind that was considered highly scandalous at the time with its themes of teenage hormones, homosexuality, masochism, sexual abuse, abortion, and suicide. By today’s standards this play is still cutting-edge theatre.

It was more recently converted into a musical with the book and lyrics by Steven Sater and the musical score written by popular artist Duncan Sheik; but keeping the setting in 19th Century Germany.  One is thus treated to the spectacle of people in turn of the century garb belting out modern rock style ballads.  A radical approach, but it won 8 Tony Awards in 2007, including Best Musical, Best Book of a Musical, and Best Original Score. 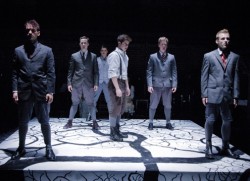 The cast of ‘Spring Awakening’ at Keegan Theatre. Photo by C. Stanley Photography.

One aspect that makes this production so appealing is Keegan’s talented live orchestra which sits towards the back of the stage for the entire show.  Jake Null leads the orchestra, which includes Nicholas Perry on the violin, Annelisa Guries on the viola, Seth Buchsbaum on the cello, Jaime Ibacache and Mike Kozemchak on guitars, Alex AuCoin on drums, and Jason Wilson on bass.  Sometimes the others instruments overpowered the strings, but overall the mixing of the orchestra with the vocals worked well.

The focus of the story is all on the young people and their burgeoning physical desires and emotional needs.  The story begins as Wendla Bergmann (Ali Hoxie), an adolescent laments that her mother gave her “no way to handle things” and has not taught her the lessons she needs to learn (“Mama Who Bore Me”).  Her mother, played by Charlotte Akin, is uncomfortable when Wendla asks “Where do babies come from?”  She can’t bring herself to  even talk about how to conceive a child, so she just says “to conceive a child a woman must love her husband with all of her heart.”

Mark A. Rhea and Susan Marie Rhea worked as a team to direct this thoughtful and often painful look at the reality of growing up in a not so kind world.

This recurring theme of curiosity is prevalent throughout the play. Indeed, it is hard enough to grow up, but having to deal with sexual abuse, abortion, and other issues makes for tough times in this non-fairy tale glimpse of 19th Century Germany.

This production is certainly a boost to the areas more youthful actors who get a chance to shine here.   Ali Hoxie and Vincent Kempski who play the doomed lovers Wendla and Melchior are an appealing pair with outstanding voices and realistic chemistry.  In fact, all the members of the ensemble have great singing voices and should be commended for all the hard work that they must have put into this play. 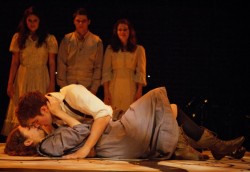 This is a show thats seems to be geared to appeal to younger audiences, (high school and college students,) but with the provision that there is some mild nudity and the use of profanity.  More importantly, though the play’s second act is far, far darker than the first.

A highlight of the show is the dark defiant rendition of “The Dark I Know Well,” by Ilsa (Nora Palka) and Martha (Sarah Chapin.)  This particular song marks a turning point in the production from an almost light hearted romp to something much more troubling and complex.

What in the first act seemed like a charming if slight coming of age tale morphs into a full blown tragedy.  Mark A. Rhea and Susan Marie Rhea worked as a team to direct this thoughtful and often painful look at the reality of growing up in a not so kind world.

Note: This play contains nudity and profanity and is not recommended for children.