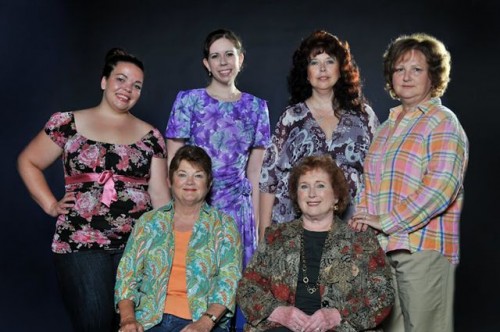 “There’s no such thing as natural beauty” may be a phrase beauty parlor owner Truvy lives—and makes a living—by, but don’t believe her. If there’s one thing to be sure of after seeing Cockpit in Court’s production of Steel Magnolias, it’s that not only does natural beauty exist, it exists in abundance.

A community theatre staple since 1987, Robert Harling’s Steel Magnolias is the story of the owner of a beauty salon in Chinquapin, Louisiana, and the five regulars that spend their time gabbing, giggling, and occasionally grieving together. Harling wrote the play in an attempt to work through his feelings surrounding the loss of his own sister, and the script infallibly shifts from memorable, belly-laugh inducing one-liners to moments of heart wrenching honesty and pain.

A script so full of life—and so well-worn—necessetates formidible actors, able to simultaneously refresh and honor characters that have embeded themsevles in our pop culture cannon. It’s readily apparent that this production’s cast was very much up for this challenge.  The six women who occupy the stage work together to deliver performances of equal parts strength and vulnerability, wrapping the audience around their manicured fingers with the graceful ease of only true Southern belles. The humor is rapid-fire and moves the show along quickly enough, until expertly slowing down to dig into the meaty emotional scenes that are as painful to watch as they are beautiful.

…Cockpit in Court’s ‘Steel Magnolias’ is a master class in sass, sincerity, and strength.

Shelby is the center of the main emotional arc of the show, which begins on the morning of her wedding. The audience quickly learns that Shelby is diabetic, which could hold her back from accomplishing her dreams. Holly Gibbs’ Shelby is sweet and headstrong, a combination that has the audience rooting for her from her first entrance.

Shelby’s loving, worried mother M’Lynn—played by Joan Crooks—makes a point to tell the ladies that she knows when to speak and when to stay quiet. Crooks holds the audience in the palm of her hand with little more than a sideways glance, and uses this ability to devastating effect. She adroitly weaves her way through the show’s emotional turns, and it’s a standout performance bursting with heart that shouldn’t be missed.

There is no weak link among the cast. Salon owner Truvy—played by Janise Whelan—is sassy, motherly, and a joy to spend time with while Clairee’s innumerable, hilarious one-liners are delivered with a pitch-perfect dryness by Harriette Bush Clarke. Annelle is a hard character to pin down as she changes drastically from the beginning of the show to the end, but is a fun performance by Laura Weiss nonetheless. Carol Conley Evans’ Ouiser is deliciously brash, but ultimately tough to understand due to some rushed delivery during some of the character’s more animated moments.

Presenting the show in-the-round was a bold choice by director Joey Hellman, and was rewarded with mixed results. Sitting around with the ladies of Chinquapin parish gossiping and laughing fills the audience with an easy joy that can’t help but make them feel at home; not to mention the intimacy brought to the more dramatic moments that in-the-round staging is perfect for. However the performance suffers slightly from one or two moments of awkward blocking, causing my particular view to be almost completely obstructed. Truvy’s and Annelle’s styling stations are somewhat unfortunately located, facing only one-fourth of the audience each. Neither of these issues spoil the show; I simply have the feeling that there was the occasional blocked exchange or reaction that was likely—based on the performances these women are giving—a shame to miss out on.

The set and lighting design—handled adeptly by Michael Rasinski—is instantly warm and inviting, imperative in a show that takes place on a single set. Truvy’s salon is bright with a checkerboard floor consisting of Shelby’s wedding colors (blush and bashful, or light and dark pink), and it is beautifully lit by soft pinks and yellows.

The costumes, on the other hand, were more of a mixed bag.  Only a handful of outfits felt authentically 1980s and fun; but when costume designer James J. Frasching gets it right, like with Annelle’s pink gingham suit, it’s magic. Also, for a show set in a beauty salon, I was slightly let down by some of the less-than-impressive hairstyles.  Go big or go home, ladies!

Despite a few minor issues, Cockpit in Court’s Steel Magnolias is a master class in sass, sincerity, and strength. It reminds us how the powerful bonds of friendship can help us overcome even the most difficult of challenges. Take a seat ladies and gentlemen; with a cast full of stand-out performances, you’re in good hands.

Running Time: 2 hours and 30 minutes with one fifteen intermission.