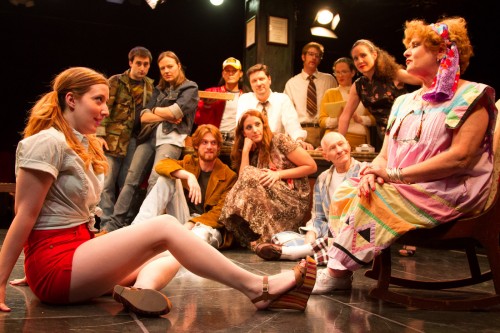 The grit, decay and lost souls that are featured in Audrey Herman’s Spotlighters Theatre production of The Hot L Baltimore may have been more relevant in 1973 when award-winning playwright Lanford Wilson wrote the script. There may have even been some shock value back then—a play that offers, for example, three hookers among the characters—but it can be seen as somewhat jaded today.

The script includes over 12 characters, and few are likable enough to merit the sympathy one would expect given the fact that their home—a run-down, once majestic Baltimore Hotel—is scheduled for demolition, forcing the residents to find another place to live.

The late Lanford Wilson was winner of the New York Drama Circle Award, the Obie Award and the Outer Critics Circle Award. The Hot L Baltimore began its off-Broadway run in 1973 and played 1,666 times. It was adapted by Norman Lear as a breakthrough TV sitcom in 1975 but lasted only one season. 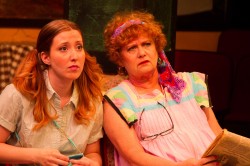 The Hot L Baltimore is more about emotion than plot. Yet the symbolism of the impending doom of the once elegant hotel matches up well with the residents’ meager lives. Characters from young to old descend upon the lobby of this decaying structure (the “e” in “Hotel” on the outside neon marquee is burned out giving the play its title, no hot water, stuck windows, broken elevator, etc.) and engage with each other on Memorial Day in 1971. The frequent, almost constant level of anger exhibited by most of these folks was palpable and that was even before they received their one-month eviction notices.

Among them were three hookers with varying degree of experiences, a curmudgeon bordering on senility, a butch woman (Jackie) who emotionally dominates her timid bother (Jamie), a middle-aged Southern belle (Millie) who adds calmness to the chaos with her slowly delivered sentimental memories, and a young man (Paul) in search of his grandfather he never met.

It seemed like everyone was waiting for something. A john waited for Suzy (Kate Shoemaker) to escort him up to her fourth floor room. The young drifter, Paul Granger III (David Schoemaker) was waiting for the hotel clerk, Mrs. Oxenham (Anne Shoemaker) to plow through hotel records to determine if his grandfather ever stayed there. Jamie (Brian M. Kehoe), the brother of Jackie (April Rejman) waited for his sister to return at the end.

Even if not demolished, this hotel is one you may never want to live in, but the talented cast and direction makes you at least want to visit.

Conflicts abound. Instead of a hotel lobby it appeared more like a hornet’s nest. The manager, Mr. Katz (nicely performed by Andrew J. Porter) didn’t help matters; he couldn’t be more obnoxious and insensitive towards the plight of the residents.

These clashes were an integral part of the play. For instance, the elderly, grumpy Mr. Morse (played adroitly by Denis L. Latkowski) fought with Jamie over a game of checkers. And things got quite rough when one of the hookers confronted Jackie about stealing from Mr. Morse. At the end of the first act the deafening altercation among the residents was nothing short of a small riot.

Yet, one character, “Girl,” played spectacularly by Ann Turiano, was by some measure the central figure. She was involved with everyone. While others exhibited despair, Girl (the youngest of the hookers) was a dreamer and loved railroads. She added balance to a play that was always tilting downward.

Despite the tensions and the imminent loss of the folks’ residence, the play failed to connect in an emotional way. There were hardly any characters to which I can feel attached and no overriding plot to get immersed. 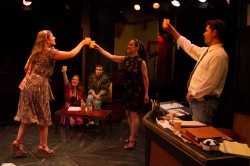 Nonetheless, the superb cast and staging under the direction of Eric C. Stein who is helming at the Spotlighters for the first time, makes this visit to The Hot L Baltimore worthwhile. Turiano, in her Spotlighters debut, had more lines than a New York subway map and executed them perfectly. Wearing ultra-tight fitting red shorts most of the time, Turiano’s high-tempo dialogue worked well with her bouncy movements that allowed her to meander around the compact stage with vigor.

Another standout was April Rejman as the butch, bullying, boisterous sister Jackie. Brian M. Kehoe as Jamie, her brother, had few lines but his facial expressions and body language displayed the horrors he must have been internalizing. Both characters thought they were investing in Utah farmland but found out it was all desert. Hillary Mazer as the Southern Millie also excelled.

The remainder of the cast was exceptional and portrayed their roles earnestly, passionately with sass and humor.

Director Eric C. Stein was quite busy as he also designed the set and costumes. Stein captured the grit of a decaying hotel lobby with an old rocking chair, an ancient-looking switchboard and phone on a dingy front desk as well as other assorted period chairs and tables. The set extended to additional two corners of the Spotlighters cozy stage area, and a staircase was used to denote the path to the upper floors.

Even if not demolished, this hotel is one you may never want to live in, but the talented cast and direction makes you at least want to visit.

The Hot L Baltimore runs through June 24 at The Audrey Herman Spotlighters Theatre, 817 Saint Paul Street, in Baltimore. For tickets, call the box office at 410-752-1225 or buy them online.