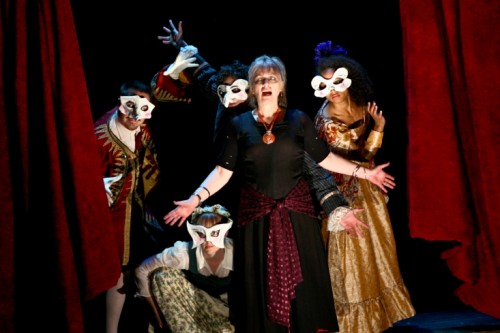 One of a magician’s golden rules is never to tell the secret of a trick.  It will only destroy the illusion of the act and the audience’s sense of wonder.  Happily, however, Forum Theatre’s production of Tony Kushner’s The Illusion breaks that golden rule.  Time and time again, we are shown the mechanics behind the deception, the theatrical invention.  Wonderfully, with each betrayal our willingness to suspend disbelief is only heightened; and, like the father Pridamant who has come to the sorceress to find the son he rejected years ago, we somehow discover ourselves believing what we want to see.

Director Mitchell Hébert has handled the production’s complex array of acting styles with great dexterity, allowing the actors to develop a wonderful array of characters while keeping them all authentically focused.

Kushner concocted The Illusion loosely around the plot and language of L’Illusion Comique, a 17th century comedy by the father of French tragedy, Pierre Corneille.  Like Corneille’s play, The Illusion freely weaves together elements of tragedy and comedy into a riveting theatrical design, a design that explores a mix of modern tensions, but essentially examines the empathy of love in a world dehumanized by money. 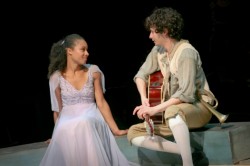 Written several year prior to Kushner’s Pulitzer Prize winning Angels in America, the play offers us the lawyer Pridamant (Brain Hemmingsen), the dying father of Calisto (Mark Halpern)—or is it Clindor or Theogenes?   Whatever the son might now call himself, the father wants to find him, and so he takes out his newly purchased Siri iPhone and seeks out the magician and sorceress Alcandre (Nanna Ingvarsson).   The father quickly learns to be careful what one wishes for, as Alcandre and her servant, the Amanuensis (Aaron Bliden), conjure him a series of hallucinations depicting his son in various stages of distress.

The source of the son’s distress is none other than that most poetic of themes: love.  The son is hopelessly in love with the princess Melibea (Brynn Tucker)—or is it Isabelle or Hippolyta.  Anyway, we get the picture.  Or do we?  For he might be hopelessly in love with Melibea’s servant, Elicia (Gwen Grastorf)—or is it Lyse or Clarina?  Whoever he is in love with, and whatever her name might be, The Illusion takes its audience on a magical journey into yet another love story, the hard, yet failing heart of a father’s love for his son.  As the son strives to make his way in life and win the heart of his beloved, he not only must do battle with his arch nemesis, Adraste (Joe Brack), but also serve the likes of Matamore (Scott McCormick), the French Falstaff who ironically also functions as the play’s most symbolic character.

Director Mitchell Hébert has handled the production’s complex array of acting styles with great dexterity, allowing the actors to develop a wonderful array of characters while keeping them all authentically focused.  Whether they are acting in the style of Commedia del’Arte or taking on turn-of-the century Realism, these performers rivet the audience’s attention, and in Forum’s intimate confines, that engagement is crucial.  Much like a traveling medieval troupe of performers, they are on a relatively bare stage only a few feet from their audience.  As we watch, we are given the opportunity to experience the actors and their character(s) simultaneously, oddly aware of both as they enact their stories. 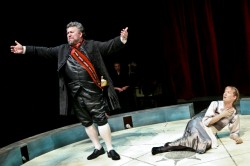 Several of the performers in this excellently crafted ensemble stood out.   Brynn Tucker embodies each of her three characters and their varying styles with an imaginative electricity that seemingly absorbed her rivals in the charge, while Joe Brack portrays the manner and ethos of Pleribo, Adraste, and Prince Florilame with an arresting subtly that allows us to understand each of their choices.  Another performance of note was that Aaron Bliden.  His magician, servant, and king covered a wide range of types, each with its own uniqueness and center.

Hébert’s team of designers has concocted a thoroughly magical world for this troupe of gifted actors to inhabit.  Though simple and rough in design—again, much as it might be for a traveling Elizabethan era troupe—the production takes advantage of every opportunity to turn the empty space into a theatrical delight of light and shadow.  Of particular note is the work of sound designer Matthew Nielson whose music, thunderclaps, and echo chambers wonderfully punctuate, and then titillate, the dramatic scenes as they unfold.

Founded in 2003, Forum Theatre seeks, as its name implies, to create a space for discussion.  Although Kushner wrote The Illusion more than twenty-five years ago, its theatrical portrayal of the struggle between love and power, between empathy and desire, still resonates.  In fact, these tensions are more heightened today than they were when the play was first produced in 1988.  And Forum Theatre’s production does more than simply continue the discussion.  In its own way, it throws down a gauntlet. Through the illusion of theatre—unmasked—it challenges us to examine the cost of our pursuit of wealth and power, a cost which might include our ability to embrace the one we love.  Kushner does not offer us any answers unless, of course, we, like Matamore, decide to reside forever on the moon.