Theatre Review: ‘The Lion, The Witch, & The Wardrobe’ at Imagination Stage 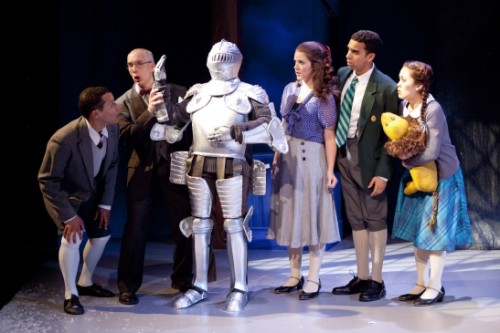 If you are looking for a different take on a beloved story look no further than Imagination Stage. The Lion, The Witch, and The Wardrobe is definitely a unique production. It is unique because this is a collaboration between Imagination Stage and The Washington Ballet. This means the production blends the two worlds of theatre and dance together.

The basic plot is as follows. Four children (Lucy, Susan, Edmund and Peter) are sent away to the countryside by their mother to avoid the bombings in 1940 WWII London. While playing a game of hide and seek they come upon a magical wardrobe that transports them to Narnia.

The direction and choreography are really beautiful and I’m sure C.S. Lewis would be very happy with what Imagination Stage has done with his material.

In Narnia there is a White Witch who can be defeated if four human children sit on the thrones at the castle of Cair Paravel. Once this happens spring will also come again to Narnia as it has been winter since the Witch put a spell over it. That’s your set up. Go to the show to see how it turns out. 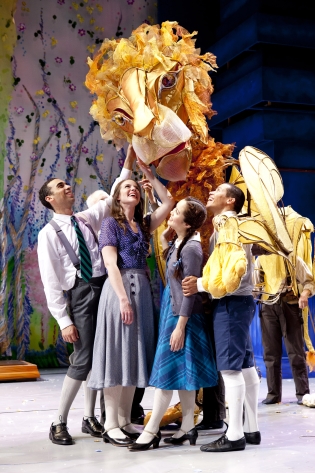 The four children are played by Rafael Cuesta (Edmund), Kate Guesman (Susan), Justine Moral (Lucy) and Christopher Wilson (Peter). The four actors do a fine job of bringing their characters to life. To meld the dance and theatre together there is also a dance double for each of the kids during the ballet sections. To give you a point of reference think “Dream Ballet” in Oklahoma. This is a nice idea but in my opinion, this might be confusing to the younger kids in the audience. At the show I was at, I heard children whispering to their parents, “who is that character supposed to be?”

Asaln the King of the Beasts is given the “royal treatment” here. He is voiced by Michael John Casey and is an 8ft high, 9ft in length, 40 pound puppet that takes three people to operate. This is a stunning achievement and really puts the character across.

Morgann Rose as the White Witch is by far the standout dancer in the piece. With her striking features Rose plays the Witch as cold but not overly scary which is good as there are lots of younger kids coming to see this show.

Imagination Stage’s Artistic Director Janet Stanford who also wrote the libretto and lyrics (plus additional lyrics by Bari Beirn) does a fine job of weaving all the different forms of theatre together. This could have been a very disjointed venture but Stanford and Washington Ballet’s Artistic Director Septime Webre and Associate Artistic Director David Palmer have managed to meld the two art forms together. The direction and choreography are really beautiful and I’m sure C.S. Lewis would be very happy with what Imagination Stage has done with his material. 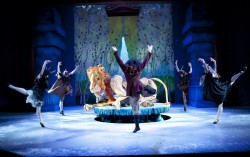 Maugrim the Wolf (Dylan Keane) and the White Witch’s minions taunt Aslan, the Lion in ‘The Lion, The Witch, & The Wardrobe.’ Photo by Scott Suchman.

Physical elements also enhance the story. Scenic Designer Eric Van Wyk (Puppet Designer as well) makes the most of the not overly large stage he has to work with. I won’t tell you how we go from London to Narnia but I will say the reveal is quite ingenious. Kathleen Geldard’s costumes and Colin K. Billis’s lighting enhance the world of Narnia and the production.

One other wonderful element of this show is the original score by Matthew Pierce. The songs and dance music create a soundscape that is an audible feast, which adds to the visual feast onstage. I am sending a shout out to George Fulginiti Shakar for his nifty musical direction.

All in all, The Lion, The Witch, and The Wardrobe is a success for many reasons. It has great music, a stellar cast, a really big lion, and members of The Washington Ballet. While the C.S. Lewis story might be more appreciated by older audiences, people of all ages will enjoy the show in their own way.