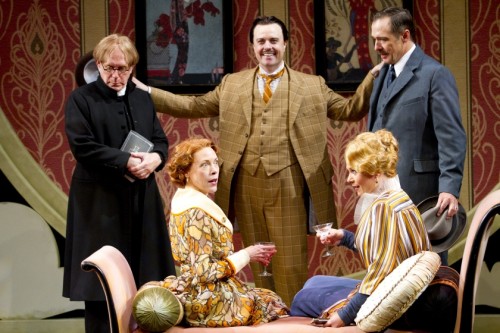 “I will find you twenty lascivious turtles ere one chaste man,” declares Mistress Page (Veanne Cox) in the Shakespeare Theatre Company’s production of The Merry Wives of Windsor. The play, set against the backdrop of a post-WWI 1919 England, is a rollicking tale of privilege, class, wealth, and lust.

…a five-act blaze of hilarity…

The play opens on a staggeringly beautiful set (courtesy of set designer Daniel Lee Conway), with a statue of matronly Queen Victoria flanked by wrought-iron balconies representing the homes of Messrs. Ford and Page (Michael Mastro and Kurt Rhoads respectively). The balconies are thronged with spectators waving Union Jacks as a military parade passes below. This parade features Falstaff (David Schramm) and his cronies, all of whom proceed to outspend themselves at Windsor’s Garter Inn. The insolvent Falstaff hatches a plot to seduce the two wealthy wives of Windsor, Mistresses Ford (Caralyn Kozlowski) and Page, and use them for their money. The women compare notes and decide instead to get their revenge on Sir John Falstaff. Meanwhile, Mistress Page’s young daughter Anne (Alyssa Gagarin) is herself being wooed by three suitors—the rather ineffectual young Slender (Michael Keyloun), the outrageously French Doctor Caius (Tom Story), and the WWI-era motorbike-riding, leather jacket-wearing Fenton (Mark J. Sullivan). What ensues is a five-act blaze of hilarity including, among other things: cross dressing, malapropisms, fairies, and sparklers. 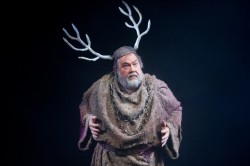 The fact that the performance was not miked made it initially difficult to understand—the setting necessitated English accents for all the actors, with somewhat mixed results. Tom Story’s French accent was reminiscent of Monty Python and the Holy Grail, but the sheer silliness of his portrayal made him the focal point of nearly every scene he was in. Floyd King’s rendition of a Welsh parson, however, was occasionally difficult to understand, and lacked some of the melody that makes Welsh accents so distinctive.  Michael Mastro, as Mistress Ford’s hapless husband, was a fantastic caricature of a twitchy, childish, jealous man, seemingly swamped by his oversized trenchcoat. His scenes with the David Schramm’s Falstaff were hilarious by virtue of both dramatic irony and the great orchestration between the two actors—Schramm’s lascivious boasting contrasted with Mastro’s barely concealed rage was comedic gold. 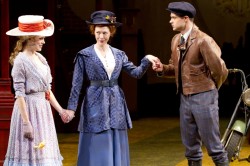 The production gets it exactly right when it comes to setting. This is Interwar England to the core—right down to the bowler hats and the Received Pronunciation announcement prior to the beginning of the show. The costumes are fabulously Edwardian, the women wearing low-top high-heeled boots straight out of Mary Poppins. The two leading ladies are starkly contrasted by their outfits, Mistress Page wearing something more appropriate to a housewife while Mistress Ford is clad in bright, lurid colors and very fashionable cuts. Costume designer Wade Laboissonniere has perfectly captured the character of this play, whether it’s Fenton and his leather jacket or Falstaff and his green suspenders.

All in all, The Merry Wives of Windsor is a fantastic production, with a huge ensemble cast that expertly juggles almost three hours and several plots while continuing to entertain. Shakespeare productions are so dependant on the actors and the director to make the words and story relevant to a modern English-speaking audience, and that it works is a triumph for director Stephen Rayne. There is nothing better than seeing a play done by consummate professionals.