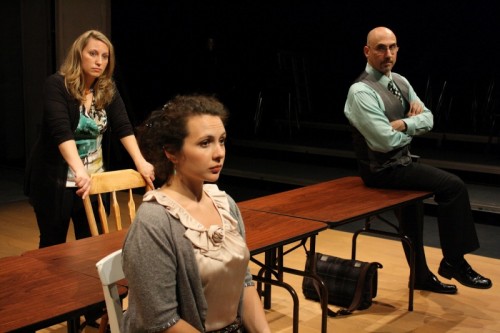 “What if people really were their jobs?”

This is the overriding theme in the Iron Crow Theatre’s 75-minute production of Adam Bock’s The Typographer’s Dream—the final installment of the 2011-2012 season. It’s a smart, funny and unique theatrical experience that is masterful in its simplicity and clever in its use of language.

Performed at the Swirnow Theater at the Mattin Center on the Johns Hopkins University campus, the stage is essentially bare except for three tables extended together and three chairs. At each chair sits a typographer (Margaret, played by Sarah Ford Gorman), a geographer who is Canadian (Annalise, played by Jenny Male), and a stenographer (Dave, played by Steven J. Satta-Fleming).

The house lights remain on as each actor introduces themselves, not by name but by their occupation at what appears to be a panel discussion. Wearing attire that would be expected for their typical workday, the characters conduct seemingly independent but at times overlapping soliloquies over a span of 76 “scenes” (some only one line long). They speak directly to the audience and rarely interact with the other two actors on stage—at least initially.

The characters define occupations in personal terms: how they relate to their jobs, how their jobs have changed, the pressures they must each endure and how they see their roles affecting the outside world. It is in this segment of the play that most of the humor is displayed. For example, the geographer’s description of Columbus’ voyage and his ultimate encounter with “Indians” was a hoot as was the stenographer’s suggestion that there is more precision needed to operate a stenograph than to be a surgeon.

The typographer is consumed by letters, typeface, text, words and truth. She is the most enigmatic of the characters and eventually succumbs to the reality that the advertising world is a “_____ business” and her work can sometimes be lies. And she feels the pressure.

The geographer is at first enthusiastic that her field is an important science. She loves maps and is obsessed by choke points and boundaries which she sees as political choices. She also bemuses the fact that geography is buried in the umbrella subject of “social studies.”

The stenographer who prefers the title “court reporter” is a sensitive fellow and is most passionate about the significance of his job and the skills needed. He witnesses cases unfold in court—real events taking shape with real outcomes—by recording the proceedings.

Over halfway through the production, the lights finally dim and that represents a change in the play’s structure. It is at this point where the characters interact and we discover that they are not separate entities but, in fact, are friends. And they all have faults. Who doesn’t?

We learn that Dave, the stenographer, is a liar. He happens to be gay and has a partner named Bob, a semi-alcoholic soul who doesn’t appear on stage. His work as a court stenographer merely places him as a bystander as events develop—a factor in his allowing Bob to drive while intoxicated. Annalise, the geographer is a self-described critical person. And Margaret, the typographer, is overwhelmed by pressure, depressed and needs to look for a new line of work.

It’s a smart, funny and unique theatrical experience that is masterful in its simplicity and clever in its use of language.

Bock’s script is pulsating but it’s the acting that makes this play a gem. Director Michelle Minnick, an Iron Crow director (Swimming in the Shallows, also by Bock) and actor, has a wonderful cast to work with. Each member of the cast has directing experience as well, and that allows the audience to witness superb technical acting skills: body language, facial expressions, timing, movements, voice inflections—all good qualities that each performer exhibited.

Sarah Ford Gorman as Margaret, the typographer, had to maintain intensity and seriousness throughout. Much of the time she listened to others but when she showed signs of anger, it got the audience’s attention. An Associate Artistic Director of Glass Mind Theatre, this was her debut performance at Iron Crow.

Jenny Male, as the sometimes hilarious Annalise, the geographer, was a powerhouse in each scene. Bouncy, energetic, and natural, Male made geography fun but was excellent in laying into Dave towards the end. Also making her debut at Iron Crow, Male was the director and choreographer for the terrific recent Howard Community College Arts Collective production of Urinetown.

And Steven J. Satta-Fleming, the Artistic Director at Iron Crow, has acted in several of its productions including In Durang’s Shorts, Swimming in the Shallows, and Love and Human Remains. He also directed Hedwig and the Angry Inch and most recently, The Soldier Dreams. His performance as Dave, the stenographer, er, court reporter, was scintillating.

While playwright Adam Bock is gay and the fact there are gay characters in the play, it is not a gay play. But Director Minnick notes that Iron Crow, a self-identified “queer theatre company,” presents “plays that skew our vision to allow us to see things differently.”

The Typographer’s Dream, directed and performed so capably, enables us to do just that. We may never view our jobs in the same light again.