1. The King and I at Cockpit in Court

Cockpit in Court has been producing high-quality community theatre for 40 years!

Synopsis: It’s the 1860’s and the Western world is closing in on Thailand. Hoping to give his family the necessary knowledge to survive in this New World, the King of Thailand hires for his children a British governess, Anna. At first, Anna and the King struggle to find common ground between Thai and British attitudes. Soon though, the two opposites fall in love. Meanwhile, Tuptim and and Lun Tha have a hidden romance even though Tup Tim belongs to the King. 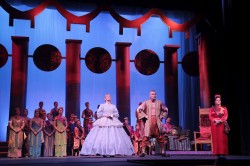 The cast of ‘The King and I’ at Cockpit in Court.

Synopis: Charlie Gordon is a grown man with the mind of a child, whose life changes dramatically after being chosen for an experimental surgery to increase his IQ. But when he discovers his newfound intelligence may be temporary, he begins to understand why ignorance might actually be bliss. 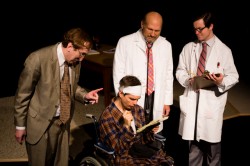 3. The Normal Heart at Arena Stage

This powerful play gets an award-worthy production at Arena Stage.

Synopsis: Tony winner George C. Wolfe, (Angels in America) directs Larry Kramer’s Tony Award-winning Broadway production of The Normal Heart. Fueled by love, anger, hope and pride, a circle of friends struggle to contain the mysterious disease ravaging New York’s gay community. Dismissed by politicians, frustrated by doctors and fighting with each other, their differences could tear them apart – or change the world. Hailed by critics, Kramer’s masterwork is an outrageous and totally unforgettable look at sexual politics during the AIDS crisis and remains one of the theater’s most powerful evenings ever. 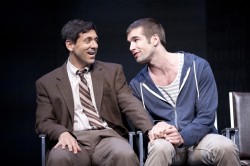 4. The Animals and Children Took to the Streets at Studio Theatre

This is a “Helen Hayes Awards Recommended” show! 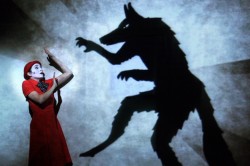 ‘The Animals and Children Took to the Streets,’ created and performed by the London-based performance company 1927 and presented as part of the Studio Theatre’s Special Events series. Photo courtesy of The Studio Theatre.

5. National Tour of Memphis at the Kennedy Center

I saw this touring company of Memphis when it came to Baltimore and really enjoyed the show.  You can check out my video of Memphis featuring two sample songs: “Colored Woman” and “Change Don’t Come Easy.”

Synopsis: This four-time Tony Award winner, including Best Musical, begs you to turn up the dial. Inspired by actual events, Memphis introduces a white radio DJ who wants to change the world and a black club singer who is ready for her big break.