‘A Quick 5’ with Alyssa Gagarin 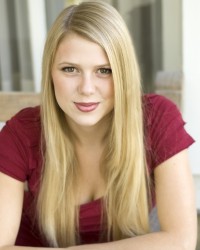 Alyssa Gagarin is currently making her professional debut at Shakespeare Theatre Company in The Merry Wives of Windsor as Anne Page. Originally from DC, Alyssa attended Holton Arms School in Bethesda. Freshly graduated from Penn State University with a BFA in Musical Theatre, her performing credits include,  Penn State Centre Stage’s productions of  The Prime of Miss Jean Brodie (dir. Susan Schulman) and Kiss Me Kate. Penn State University credits include I Love You Because, Sunday In The Park With George, and She Loves Me. Alyssa is a very talented actress and I look forward to seeing more of her on stage in the near future.

Who did you study under at Penn State University?

I graduated in May from Penn State’s BFA Musical Theatre program, headed by Cary Libkin. There are several incredible professors that I was very fortunate to study with in voice, dance and acting: Mary Saunders, Dan Riddle, Susan Schulman, Spence Ford, Michele Dunleavy, Charmian Hoare, Jane Ridley, and Mark Olsen. Penn State’s program is rigorous in all three areas, and these professors have prepared me and my twelve extremely talented classmates very well for the profession. I walk away from my college experience with many skills and values to make me as well rounded and versatile as I can be. I hope to always continue to train and work on my craft.

Did you perform any Shakespeare in college?

This is actually my first role in a Shakespeare production. I’ve always had a love for Shakespeare. I had training in Shakespeare at Penn State and I was really drawn to the language. The beauty of Shakespeare is that everything is in the text, and Shakespeare gives so many gifts to the actor on the page, through his imagery and clever literary devices. Besides being in the ensemble of a production in High School, Merry Wives is my first crack at it onstage! 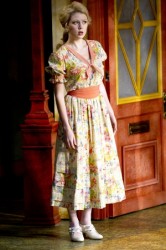 Alyssa Gagarin as Anne Page in the Shakespeare Theatre Company’s production of ‘The Merry Wives of Windsor,’ directed by Stephen Rayne. Photo by Scott Suchman.

Can you please tell us about the character you play in The Merry Wives of Windsor?

Anne is the sixteen year old daughter of the Page’s. The subplot of Merry Wives follows Anne and her three suitors now that she has reached the age of marrying. Her suitors include her father’s choice, her mother’s choice, and Fenton, a handsome, rebellious, motorbike riding young man who she has fallen for. Anne is described as kind, sweet, gentle, and honest, all of which is true. But she is also very intelligent and independent and takes a stand for herself. She defends her love by deceiving both of her parents wishes.

What other characters of Shakespeare would you like to tackle?

I would love to play the role of Julia in Two Gentlemen of Verona and I am also very interested in Ophelia. One day down the road, I would love to tackle Lady Macbeth. I am fascinated by her.

After The Merry Wives of Windsor where can we see you next?

I will be playing the role of Emily in Thornton Wilder’s Our Town at Ford’s Theatre this winter!