‘A Quick 5’ with Jon Levenson 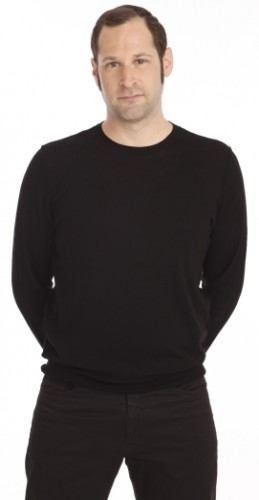 Jon Levenson currently is performing the roles of Hiram Keebler and the Examining Doctor in Arena Stage’s must see production of The Normal Heart for which Jon also appeared in on Broadway Off-Broadway credits include Harold in The Boys in the Band (Transport Group), The Hairy Ape (Irish Repertory Theatre) and Crime and Punishment (59 E 59). Select regional performances include Orlando in As You Like It, The Baker in Into the Woods (Clarence Brown Theatre) and Treplev in The Seagull (Porchlight Theatre). If you want to see some great acting get thee to Arena Stage and see Jon and a knockout company in one of the most important shows you will ever witness. It will definitely make you think about a lot of things. One of those being how we’ve come so far but how certain things unfortunately have not.

What is your first memory of being on stage?

Well, I can’t quite recall my first shot at being on stage, but I do remember the first time I saw a “play.” I was in kindergarten and a group came to our school to put on a show about nutrition. After an hour or so of being swept into a world of dancing and singing carrots and milk cartons and talking hams and loaves of bread, I knew I wanted to get up there too. Upon being dismissed from the assembly, my teacher put her hand to my chin and closed my awestruck open mouth.

Having played in The Normal Heart on Broadway and now at Arena Stage, can you please tell us what drew you to the piece?

While there are many types of plays I love dig into, my hopes as an actor have always been tied to the belief that theatre can alert people to the ways in which they can grow and make positive change in our world. So when the opportunity to audition for The Normal Heart came along and I read the play, I felt the gale force aggression of the characters’ fight and I knew that I had to find my way into the piece. I couldn’t be more grateful to participate in a piece that allows me to feel challenged as an artist and an activist. 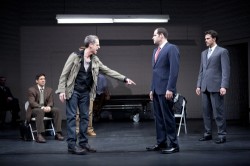 Can you please tell us about your character in The Normal Heart, Hiram Keebler?

Hiram is Mayor Koch’s assistant. Like the other characters in the play he is frightened by the onset of this strange disease, but he is trapped by his political responsibilities and therefore he must shield himself from connecting with anyone too radical or succumbing to an empathetic impulse. He is also a closeted gay man and being outed could mean the end of his career. Being a man of power, or in close proximity to power, he has a lot to protect.

The Normal Heart is emotionally draining to watch as an audience member. Do you find yourself the same way at the end of a performance and what do you do to wind down at the end of the night?

Having understudied the production last year on Broadway, I’ve seen the show well over a hundred times. Each night as I watch the final scenes of the play (we all observe a portion of the second act) I begin to think I’ll finally be able to relax and just watch my amazing friends and colleagues at work with a sense of peaceful detachment. But it’s a foolish expectation because undoubtedly by the final speech I am experiencing the scenes with the audience and they are having their first experience with the piece. I am reminded of all of the stories I’ve heard and personal accounts of friends and family and strangers who have come to share our play and experienced in some way the stories Larry Kramer is sharing. And the collective heart of the play grows with each audience that sees it, so as a very proud part of that it is impossible to detach. In an effort to wind down post-performance, I usually call my family in California. I just want to connect with my people and hear about their days and tell them I love them.

After The Normal Heart finishes, where can we see you next?

Well, I will be heading to American Conservatory Theatre in San Francisco with The Normal Heart and I couldn’t be more excited to bring the play to the Bay area. Beyond that, who knows? But when it is time to move on, I’ll certainly miss this experience.