‘A Quick 5’ with Michael Mastro 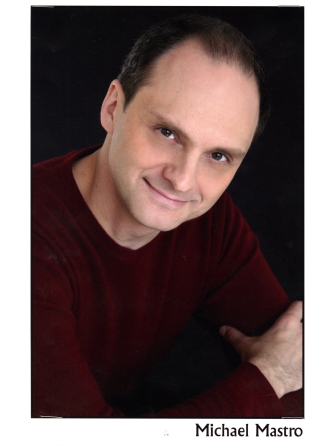 Michael Mastro is currently playing the role of Ford in The Shakespeare Theatre Company’s production of The Merry Wives of Windsor. Broadway credits include West Side Story, Twelve Angry Men, Cat on a Hot Tin Roof (with Ashley Judd and Jason Patric), Mamma Mia!, Judgement at Nuremberg, Side Man (also at Kennedy Center, Helen Hayes Award nomination), Barrymore (with Christopher Plummer), and Love! Valour! Compassion! Off-Broadway performances include 59E59/Act Two Playhouse: Any Given Monday; Playwrights Horizons: The Water Children, Naked Angels: Escape from Happiness. Select regional credits include performances at George Street Playhouse, Paper Mill Playhouse, Old Globe, Williamstown Theatre Festival, Coconut Grove Playhouse and Penguin Rep. Michael recently made his directorial debut with The Subject was Roses at George Street Playhouse. I have had the pleasure of working with Michael at Paper Mill Playhouse on Neil Simon’s The Dinner Party. He is always a joy to watch on stage and if you see The Merry Wives of Windsor at STC I’m sure you will agree.

My first professional job was at a (still thriving!) non-Equity summer theatre in Chatham, New York called the Mac-Haydn Theatre.  I’d grown up not too far away, and in the years before I worked there, my parents would take me to see Mac-Haydn productions when the theatre was located in a barn on the Chatham Fairgrounds. (I saw a very funny actor named Joe Lane do lots of supporting roles in musicals the summer before I was hired.  Not long thereafter, he returned to New York City, changed his first name to Nathan, and, well…you know the rest).  The summer I was sixteen, I auditioned and was hired to be an unpaid “actor-trainee”; the next summer I graduated to an “actor-tech” position at a whopping $60/wk. I acted all right…and sang, and danced, and built scenery and costumes, AND cleaned the bathrooms…everything.  All of us kids would work hard and get to bed as late as 3 or 4 a.m., and then be back to work the next morning at 9. But, man, I loved it!  I’d become a theatre geek by then, and my life was now suddenly theatre 24 hours a day…glorious when you are young and fresh-bitten by the bug. 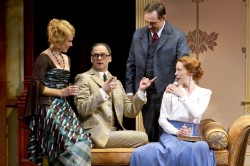 Caralyn Kozlowski as Alice Ford, Michael Mastro as Ford, Kurt Rhoads as Page and Veanne Cox as Margaret Page in the Shakespeare Theatre Company’s production of ‘The Merry Wives of Windsor,’ directed by Stephen Rayne. Photo by Scott Suchman.

Can you please tell us about your character in The Merry Wives of Windsor?

I play Ford, the eternally jealous husband of Mistress Ford, one of the two merry wives of the title.  To teach me a lesson, my wife and her friend, Mistress Page, devise a plot to make me believe my wife is having an affair with an equally deluded Falstaff (who would himself like to think that he is going to have his way with her).  I fall for it, hook, line and sinker, and have more than one high-octane meltdown before they reveal their scheme to me and all is forgiven.

You performed with the great Christopher Plummer in Barrymore. What was the experience like and what did you learn from watching him in action every night?

Great question!  It was an absolutely wonderful (and truly singular) experience to work with Chris in that play because it was just the two of us, and the set up had me offstage for the entire play!  I played the voice of John Barrymore’s (Plummer) fictional prompter/assistant, Frank, who throws lines of Shakespeare to him and needles him forward over the course of his two hour attempt to win backers (the audience) for a Broadway revival of his triumphant turn in the title role of Richard the Third.  Though I was offstage, we were always in view of each other, and I played those scenes as if I were onstage myself.  There were, however, long stretches of Chris talking to the audience, and I got to absorb what he was doing night after night.  I soaked it up like a sponge: his intense concentration, his unerring timing, his sense of pace and rhythm, his ability to command their attention in absolute silence and stillness, and of course, his humor.  I call upon my memory of all of those things often as I continue to work (especially when I’m doing Shakespeare!).  It was a true master class in the art of acting, and I got paid to take it.  A crazy blessing!

You recently made your directorial debut at George Street Playhouse with The Subject Was Roses. If presented the opportunity again, would you direct another production?

You bet!  I love working on the other side of the footlights.  I teach actors from time to time, as well, and nurturing the work of actors is very exciting for me.  It makes me a better actor, as well.  I’m also something of a control freak (very helpful in playing Ford!), and I really get off on orchestrating all of the elements of storytelling in the theatre: the text, the actors, the design elements.  It brings me back to the times, as a kid, when I used to direct my friends in improvised plays performed on top of our picnic table in the back yard.  (Genius, I’m sure!!)  I try always to stay in touch with that kid.  Nothing is good on stage if there is no joy or childlike wonder in the creation of it.

After The Merry Wives of Windsor closes what are your next few projects?