‘A Quick 5’ with Randy Skinner 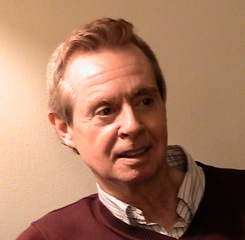 Randy Skinner is currently the Director and Choreographer of Dames at Sea playing at Infinity Theatre Company in Annapolis. He is a three time Tony Award nominee for his work on White Christmas, 42nd Street and the short lived Ain’t Broadway Grand. He co-directed and choroegraphed Rodgers and Hammerstein’s State Fair which starred John Davidson and Andrea Mcardle. It also was the legendary producer David Merrick’s last Broadway show. Randy’s work was most recently seen in NYC at Encores! with Gentleman Prefer Blondes which is aiming for a Broadway run this season (depending on its star’s schedule). Other credits include After The Night and The Music for Manhattan Theatre Club and multiple productions for Encores! including Do Re Mi and No,No Nanette. Randy has worked with the likes of the great Gower Champion whom he assisted on the original production of 42nd Street and has set companies of that show all over the world. For the recent Broadway revival there was some new material added as well. He is a very talented man.

What were your first professional jobs as a dancer and choreographer?

My first professional job as a dancer was in The Pajama Game starring Juliet Prowse. It was for the Kenley Players which was a summer stock venue with theaters in Warren, Dayton and Columbus, Ohio. I was in college at Ohio State University when I first auditioned for Mr. Kenley and I danced for him during many summers, even after moving to New York. It’s funny, I can’t remember what my first professional choreography job was. I do clearly remember Gower Champion taking me to lunch one day and encouraging me to branch out and begin that part of my career. I often think about that lunch conversation.

What do you remember the most about your first meeting with the legendary director/choreographer Gower Champion?

I remember vividly how much fun it was to be in a room with him, just dancing around and experimenting with all kinds of movement. It was relaxed but very creative. He hired me at the end of that first day together.

Your current production of Dames at Sea is currently playing at Infinity Theatre Company. Can you please tell us a little bit about the show’s history and what drew you to the project?

Dames At Sea is a wonderful show with a very tuneful score and a fun script that is an homage to all of the Busby Berkeley films of the 1930s. I love those movies and I’ve always been drawn to Dames because of the humor and cleverness of the script. And it has lots of tap dancing which audiences really love. The show was first produced off off-Broadway in 1966 and then it moved to off-Broadway in 1968. Both of those productions starred a very young Bernadette Peters and the show really launched her career.

You have set multiple companies of 42nd Street all over the world as well as being the choreographer for White Christmas which is entering its ninth season as a holiday attraction. When you return to a show to remount it, do you always go in with a fresh approach to the material?

Always. I have made little changes and improvements to White Christmas every year. That is the great thing about having a show that returns every season. It is fun for me to re-visit the production numbers and keep tinkering with them. When I do 42nd Street, the size of the production alone dictates that changes and adjustments need to be done, as you seldom are handed the original size of the ensemble which was 24 girls and 12 guys!

With all of the shows you have been associated with, what do you consider to be your greatest achievement?

I would have to list both the revival of 42nd Street and White Christmas. With 42nd Street the challenge was to pay tribute to the original but make if feel new and fresh for today’s audience. I think we accomplished that. It was also great fun to create choreography for additional songs that were added to the revival. White Christmas was another kind of challenge because of the variety of dance styles that the show required. I loved that I got to choreograph numbers that were based on jazz, ballroom, and tap vocabulary. And with both shows, I paid close attention to period style and detail which is always a challenge to get accurate, but very satisfying when you do.

Dames At Sea is playing through August 5th Thursday–Saturday evenings and Thursday and Sunday matinees. Fri–Sat @ 8; Thurs @ 2 and 7; Sun @ 2. The theater is at 1661 Bay Head Rd. Annapolis 21409, at the CTA Theatre Complex (the sign from the street says Children’s Theater and you will see playground equipment.) It is easy to find, but the web site has directions. Buy tickets here or call 877-501-8499.