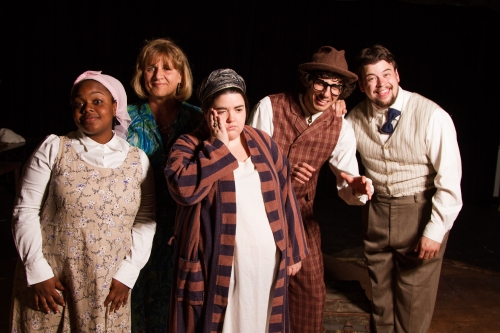 Shana Unsettled, now playing at the Fells Point Corner Theatre, is difficult to watch for a myriad of reasons. It is a play partly without context—its setting, a single inhabited home in the middle of a war zone, and its lone resident, a head-scarf-clad young window—is more reminiscent of Margaret Atwood’s A Handmaid’s Tale than any real-life circumstance. The characters that parade in and out of Shana’s life are as much allegories as they are people—the Marxist-Socialist Jewish grandmother, the dutiful and religious housewife, the vaudeville duo of aging Palestinian refugees.

…this play tackles a difficult topic, and does so with great humanity, technical skill, and disquieting sincerity.

Shana is technically brilliant—lighting designer Eric Bowers has perfectly captured the slightly blue look of midnight, and its slow transition to dawn. Sound cues were excellent; Beni (James Robert Giza) and Hadi (Jamie Driskill)’s first appearance was accompanied by the dreamy tones of Glen Miller’s “Moonlight Serenade” played on Beni’s portable phonograph. The set, a lone wooden porch with wood-paneled siding and a single, dusty window, was just dingy enough and unobtrusive enough to add character to the actors moving in and around it. 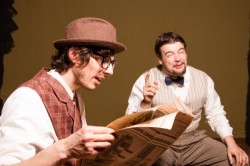 The acting, likewise, was fairly good. James Robert Giza’s performance as “combat fatigue”-stricken Amos in particular was excellent, accurately capturing the frenetic energy of a man struggling to run from his own thoughts. Shana (Kelly Cavanaugh) herself was a picture of exhausted confusion, torn between her memories of her lost husband, her desperation for her lost cat, and her bewildering reality. Her confrontation with the ghost of her brutal husband Michael (Jamie Driskill) was at once moving and terrifying.

All that being said, this was a very confusing play. I give kudos to directors Jim Knipple and Janel Miley for their ambition, but after reading the directors’ notes half a dozen times I suspect that the efforts to universalize this piece have prevented its very specific context from accurately coming across. As a result, the fairly didactic message of Ronda Cooperstein’s play (the futility of the Palestine-Israel conflict) hits with the force of a feather instead of an anvil—and its constant repetition distracts from very real and potentially very interesting characters.

Events like the Baltimore Playwrights’ Festival, of which Shana Unsettled is a part, are crucial to the survival of theatre as an evolving art form. Despite its flaws, this play tackles a difficult topic, and does so with great humanity, technical skill, and disquieting sincerity.

Shana Unsettled plays through July 15, 2012 as a part of The Baltimore Playwrights Festival and is hosted at The Fells Point Corner Theatre. For tickets, call the box office at  410-276-7837, or purchase them online.