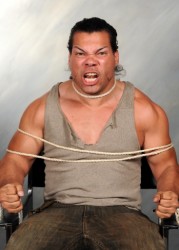 On November 19, 2011, a shot rings out at Kyle Wellington’s Texas house. At home is Kyle (Steve Izant), his wife Laura (Peggy Friedman), his brother Ty (Bruce Levy), his daughter Annie, and an unwelcome guest—convicted felon and reported stalker Thomas Lofton (Lyon Beckwith). The police find Lofton tied up with a bullet wound in his forehead, a handgun with no fingerprints, and both Wellington brothers confessing to the shooting, claiming self-defense. This is the setting when New York prosecutor Dan Fuller (Troy Hopper) enters a Texas court room to try Kyle and Ty Wellington for murder, a crime which in Texas carries the potential penalty of Lethal Injection.

Lethal Injection, now playing at the Vagabond Theatre, is set in a Montgomery County courthouse, the judge’s bench flanked by the American flag (left) and the lone star of Texas (right). Governor Rick Perry smiles down from his perch against robin’s egg blue wallpaper, opposite a sketching of the Alamo. This place, where “New York is a foreign country,” according to his associate Bryce (Coreen Ayr Hamilton), is the stage on which Fuller will try to rescue his career from a disastrous defeat that let a criminal walk free. He is fighting prejudice, xenophobia, and the interests of a governor who thinks the death penalty issue might ruin his reelection campaign.

… it’s a fun and interesting play to watch.

I wish I could say that this play was as much a moving struggle in defense of “truth, justice, and the American way” as, say, a drama like Mr. Smith Goes to Washington—the battle of a lone idealist versus the private interests of some very wealthy, very influential parties. But, despite some scenes that were purely didactic on the topic of the death penalty, the argument for capital punishment never gets an effective airing out. Its use as a prospective penalty for two vigilantes only underscores the issue of people (with families who love them) being executed, whether by the state or an angry father. As a local reporter explains it, “we kill people who kill people so know it’s wrong to kill people.” 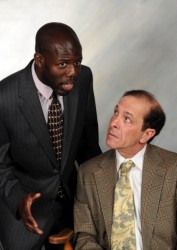 Ambiguity aside, it’s a fun and interesting play to watch. Levy and Izant have few lines, but they were constantly present in the scene, watching and commenting to each other, reacting to evidence and examination with real feeling. Both Hopper and his defense counterpart Robert Wiley (Tor Tonnessen) directly address the audience, Tonnesson affecting a leisurely drawl to charm his Texan jury against the Yankee prosecutor. Marc Rehr’s performance as Judge William Toffett, a well-connected member of Texas’s high society, is good comic relief, eliciting laughter even in the most tense of circumstances.

The most moving performance, however, must go to Lyon Beckwith, who takes the stand as Thomas Lofton’s twin brother Cain. His grief is palpable, his confusion heart-breaking. The suffering he endures under Wiley’s ruthless cross-examination, with all his brother’s misdeeds trotted out in front of the jury, is perfect.

If you want a play that discusses the potential negative ramifications of the death penalty, I’d recommend something like The Exonerated. But Lethal Injection is a different type of story altogether. Court rooms are refuges of ambiguity, where triumph is determined by the absence or presence of reasonable doubt. This play captures that confusion in full, while offering up a juicy courtroom drama deep in the heart of Texas.

Lethal Injection is playing at the Vagabond Theatre in association with the Baltimore Playwrights Festival through August 5, 2012.  For tickets call 410-563-9135 or online.