Fringe Review: 3rd Annual “Fool for All”: ‘Tales of Marriage and Mozzarella’ 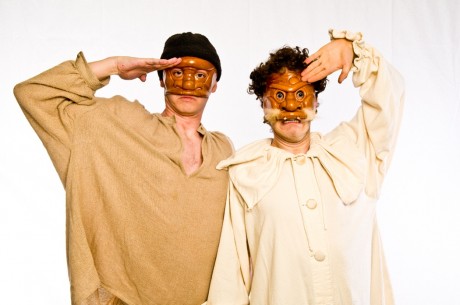 The 3rd Annual Fool for All. Photo by Clinton Brandhagen.

I love Commedia del’ Arte. It is the actor’s art elevated to the stars: the creativity, the spontaneity, the precision, the physical creation of character, the art of the story—oh, and did I mention “the funny.” Commedia is what inspired Shakespeare’s clowns; it’s what it means to sing (or joke, or somersault, or dance) for one’s supper. It’s my admiration for Commedia and its improvisational daring, and what that essence represents to theater’s magic, that drew me to faction of fools’ 3rd Annual “Fool for All”: Tales of Marriage and Mozzarella. Ultimately, however, it is what also led to my disappointment. Although there were some creative moments, some fun moments—and one extraordinary Zanni whose pure joy of performing drew my eye whenever she shrank in fear—much of Marriage and Mozzarella fell short, lacking the spontaneous wonder upon which Commedia so depends.

The evening consisted of four distinct scenes performed by some two dozen DC comic actors. One of the funnier scenes was “The Marriage Bed,” about a young wife’s anticipation of her wedding night. Although the scene had some fine verbal repartee between Zannis, its success lay primarily in the presence of Jan Johns as Chastina. Her comic timing and in-the-moment acting was a delight to behold.

In “The Wedding Planner” a young bride-to-be’s desire for a simple wedding runs straight into a wedding planner’s desire for an expensive, elaborate, “simply the best” of all possible weddings. Unfortunately, the troupe lost focus on the scene’s conflict, despite some very funny moments for the Chocolatier (Rachel Spicknall) and the Baker (Jessica Shearer). And, of course, there was a fabulous caw caw lassi bird-dance that captured the essence of Commedia’s unencumbered spontaneity.

…many in the friendly audience at Tuesday’s performance enjoyed the show.

“Hopefully Ever After,” another marriage scenario, had several fun bits, particularly when Pantalone (Matthew Pauli) and Dottore (Paul Reisman) had to fend off the groans of the audience over some puns that failed to rise.

Finally, “Graters of the Lost Cheese” focused upon Capitano’s (played by TD Smith) search for the holy Mozzarella. This scene had several creative moments—in particular a delightful large spider that swallows its victims whole; but the performance that stole the scene and the show was turned in by Zanni Brynn Tucker. Ms. Tucker, who gave a stellar performance in Forum Theatre’s The Illusion earlier this year, has the kind of physical dexterity and clownish abandon upon which Commedia del’Arte was born to thrive. Every time she scampered across the stage, either landing joyfully in the lap of an audience member or tittering beneath the roar of a scary cheese, she convinced me that spontaneous imagination is Queen.

All this being said, many in the friendly audience at Tuesday’s performance enjoyed the show. It is clear that faction of fools Theatre Company has developed many loyal followers, and that those followers enjoy the community spirit that the troupe’s camaraderie engenders. Being outside that community probably placed me, as a reviewer, somewhat at a disadvantage.

ASL interpretation is provided at all shows. Indeed, interpreter Billy Sanders’ comic expressions captured the spirit of Commedia and was an absolute joy to watch.