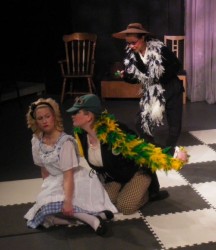 Some of the first lessons I learned in the theatre were centered around the old adage: no guts, no glory. Make the gutsy choice and learn to live or die by it—that was the theatre artist’s creed. That’s one of the reasons I enjoy the Capital Fringe Festival so much: in three weeks you’ll see more guts than in a year of mainstream theatrical activity. I’ll leave it to others to decide just how much glory people are taking home after the shows are dead and buried. So when I heard that The Greenbelt Arts Center was tackling Andre Gregory and the Manhattan Project’s Alice in Wonderland, I had to tip my hat. Now, that’s a gutsy move worthy of the counter-cultural generation. For those who don’t know, Andre Gregory is the subject of the film, “My Dinner with Andre.” He gave up theatre in 1975 because it lacked significance in modern life; instead, he joined the Polish physical theatre visionary Jerzy Grotowski (of Towards a Poor Theatre) and developed several para-theatrical events meant to move their audiences toward spiritual catharsis. All that’s to say, that this Alice in Wonderland is not so much a play script as it is a performance text, a series of events demanding a high level of both creativity and physical acting to make that series, not only intelligible, but also joyful and full of life and being. Although Greenbelt’s production of Alice had some fine visually satisfying moments, those moments were too few (and possibly too abridged) to make the randomness of its performance satisfying.

Though all of the actors needed more time to find creative solutions to the spectacle that Alice in Wonderland demands, each approached their parts with sincerity and made significant discoveries along the way. Liz Cassedy created many of the most memorable moments. Her delightfully sweet Alice floated balloon-like down 5th Avenue blown by wind and tethered by cord. She successfully used her dancer’s agility and training to portray most convincingly a doll sorely in need of a puppeteer. Ryan Willis had the Caterpillar down on his mushroom, smoking his Hookah and wearing his dark shades while speaking in his deep Barry White voice. Kathleen Mil’s White Queen was as giddy as a tipsy kitty cat as she scuffled about the stage in search of God knows what, while Rhonda Anstead had us all lose our heads as the inflated-in-a-different-way Red Queen. Susanne Bard and Brendan Perry also had their moments: Ms. Bard as the haughtiest of Duchesses and Brendan Perry who, as Humpty Dumpty, sways and sways teetering atop his peak.

The show’s scenographic elements were well done, particularly Ronda Anstead’s colorful costumes, which were scene setting as well as functional. The checkered black and white floor and sets, though basic, were used to good design by the director, Betsy Marks Delaney. She needed a bit more time, however, to solve several transitions, which interrupted the action of this oh-so-fluid play.

Liz Cassedy created many of the most memorable moments. Her delightfully sweet Alice floated balloon-like down 5th Avenue blown by wind and tethered by cord.

On Sunday at noon, when the play opened with Jefferson Airplane’s “White Rabbit,” we were sent flying back in time to the late 1960s, to a time when breaking the rules might get you arrested and theatre with an infinity of possibilities was just beginning its renaissance in American life. I thought of how wonderful it was to be experiencing, however abridged, Andre Gregory’s Alice in Wonderland. And even though you, like me, might find yourself imagining the possibilities while watching Alice’s action unfold, this trip might still be worth the time, if for no other reason than it is the flights of our imagination that make any trip worth taking. “Go ask Alice (or Ms. Cassedy), when she’s ten feet tall.”

Advisory: Recommended for children 13 and up. Contains surrealistic storyline and has drug innuendoes.