Fringe Review: ‘Blanche: The Bittersweet Life of a Prairie Dame’ 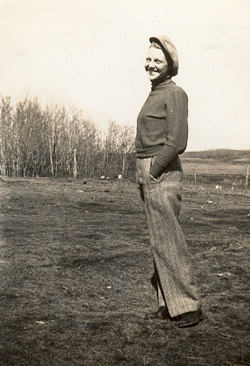 The real life Blanche from ‘The Bittersweet Life of a Prairie Dame.’ Photo courtesy of Onalea Gilbertson.

Blanche: The Bittersweet Life of a Wild Prairie Dame is a theatrical song cycle based on the life of creator Onalea Gilbertson’s grandmother. Through the use of music, projection, and really good storytelling, this show is one that should have a life outside of the festival circuit.

Onalea Gilbertson wrote this show as a tribute to her grandmother after she entered a nursing home. Its inspiration is based on some vintage photos found in her grandmother’s house. The piece gives us a look into what the depression era was like in Alberta Canada.

Gilbertson along with three musicians, who also play the men in Blanche’s life, take us on an on-stage musical journey while voiceovers of the real Blanche are heard along with projections of those vintage photos from Blanche’s life.

Gilbertson is a dynamite performer as well as being a good composer. She wrote all of the songs for the production with Morag Northey and Jonathan Lewis. A song cycle is not easy to write, but Gilbertson’s score ranges the gamut from soulful ballads like “The Last Time I Saw You” to the fun “Weekend Parties.” The music is expertly played by Josh Henderson (Violin), Eric Richardson (Gutiar) and Brian Sanders (Cello).

Director Rachel Avery has done a good job keeping the show moving while not rushing things. She just lets the material breathe and lets Gilbertson and company tell the story.

This production next plays Fringe NYC in August, and I hope it gets noticed and picked up for a commercial run somewhere. Onalea Gilbertson and her troupe have created a very good show with accessible music, an interesting story, and all around wonderful performances.

As I reviewed the last performance of this show on July 26th, 2012 click here for the dates the show will be playing at Fringe NYC.