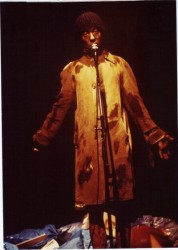 DC Trash is the wild, poetic, satirical brainchild of Ron Litman, who performs the show in its entirety with the help of tech-savvy musician and long-time friend and collaborator Tom Pile.

From a quick glance at the web site, DC Trash is “a satirical tour of DC, past, present and future as seen from inside a trash truck.” Upon attending, however, I found this show was much, much more than that. Seemingly part autobiographical, DC Trash is filled with a lot more love, passion, and understanding of humanity than a mere satire.

In this show are the lowest of the low, from the homeless “Mayor of Massachusetts Avenue” to the immigrant trash workers who are practically invisible. If you go to see DC Trash, you will spend a lifetime in the shoes of a third generation white Jewish man who sees the ghosts and remnants of the peoples who built D.C., suffered in it, reveled in it, and moved on. What testaments are there to their stories, and ours? Perhaps only our trash: he posits, which tells all too much.

…’DC Trash’ is inspiring and energizing.

I loved Litman’s performance, which had the liveliness and power of spoken word poetry, the hilarity of truth that is stranger than fiction, and the awe and gravity of passing words between people carrying terrible realities, which might rear their ugly heads when least expected. I loved his irreverent language, so appropriately common, down to earth and full-bodied. Litman captures characters and caricatures both, moving seamlessly from one personality to another. He speaks intimately with his audience, who warms up to him quickly, laughing and expressing shock vocally, having become so comfortable with him. What will he do next? We wonder. What won’t he?

Performed with a simple set of cardboard boxes doubling as building facades, a few spare costuming pieces, and effective sound and lighting, DC Trash is inspiring and energizing. One thing that I found confusing at times is it is never clear exactly how much of the show is autobiographical. It is performed with such intimacy of knowledge that I am tempted to believe all of it is, but I did not find this clearly stated anywhere. I would love to know more about this show and perhaps see it again, and for those of you who are wondering what shows to see at the Capital Fringe Festival this year, I think it is telling that the show sold out the first night.

Advisory: This show contains profanity and adult subject matter and is not
appropriate for children.

DC Trash plays through July 28, 2012 at The Bedroom at Fort Fringe, 610 L St. NW DC. For tickets, purchase them online or at the venue before the show.