Fringe Review: ‘Donna has a Boyfriend’ 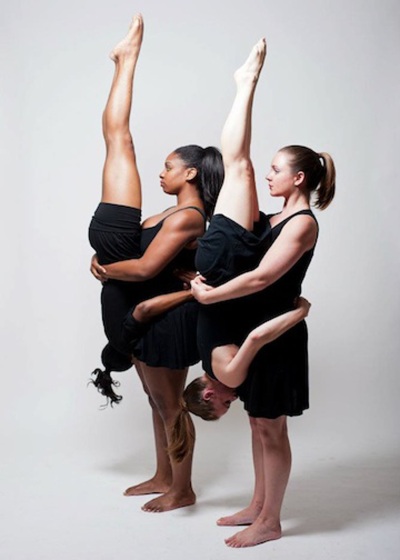 “(The Censoring of) Approximate Location.” Photo courtesy of darlingdance company.

The human body, large or small, tall or thin, whatever shade or hue, is, when in graceful motion, beautiful to behold. Under the artistic direction of Hayley Cutler, darlingdance company approaches the art of movement from that perspective. Ms. Cutler has choreographed three pieces entitled Donna has a Boyfriend. She uses seven dancers, with a variety of body types, a shifting and sometimes jarring musical arrangement, to create it. If at times you are puzzled, that’s because Ms. Cutler has a risky choreographic mind. Her choices usually succeed, but sometimes don’t. In the end, however, you’ll leave the theatre intrigued by the intricate web of patterns, behavior, and iconography she and her dancers weave.

The show opens with the most esoteric of the three pieces, “(The Censoring of) Approximate Location.” Barbara Caldwell, Jennifer Caulk, April Gruber, Felicia Stevens, and Cara Zimbalist perform this exploration of design and fragmentation. The piece begins with the five dancers skittering across the stage like so many ducks in an arcade’s Duck Shoot, before disintegrating into a spasm of individualized movement and pattern. As the piece progresses between these two points, it produces a variety of images, the most striking of which is that of the salute and the pinpoint halo.

The clearest piece, “And Every Year is Zero,” is also the most puzzling; it is also a “preview of an unfinished work-in progress.” Two dancers, Felicia Stevens and Rick Westerkamp, perform a romance, of sorts. At times strangely disconnected, at others embraced in passion, the two dancers explore the contours of relationship without a narrative. In it, Ms. Cutler presents the audience with its first encounter with the musical possibilities of silence.

The final piece, “Good Riddance Donna,”—possibly a response to Donna having a boyfriend—takes the spectator into the heart of an emotional plea. Although the music of silence is once again mined for its potential, it is the piece’s daring conclusion that will leave you wondering. About what? Are the eyes the windows to the soul? Is repetition a means to perfection or a recipe for boredom? How slowly, then how quickly, can a person perform the same action with the same results? I wanted to burst out laughing, but held my absurd tongue.

Donna Has a Boyfriend combines imagery that seeks not so much an emotional connection to its audience as it does an aesthetic one. In so doing, it challenges its audience to imagine the possibilities of its iconography and the improbability that we will ever know for certain what the iconography of a gesture is, or is not.

It performs one more time, July 25 @ 10:15, at Gala Theatre at Tivoli Square. For tickets click here.