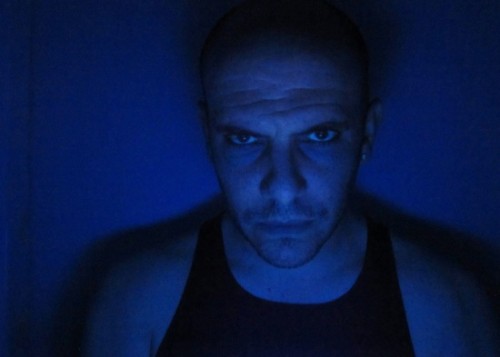 In the world of theatre there is nothing more certain than the possibility of seeing yet another production of Shakespeare’s Hamlet: companies produce the classic over and over again. So if you are a new theatre and you have decided to produce “the revenge tragedy” as your opening number, you had better have a good reason. Fortunately, for We Happy Few Productions, they have several. Most importantly, they have a daringly innovative directorial concept that is sure to raise a few eyebrows and question marks. Then, they assembled a strong production team and acting ensemble. Finally, they found actor Chris Genebach, who performs this 90-minute, non-stop, ferociously mad Hamlet with such dexterity and polish that you are guaranteed to leave the theatre sympathetically breathless and exhausted.

Director (and co-founder of the company) Hannah Todd’s concept is amazingly simple: in fact, according to legend, it was born in a bar. What if the play took place entirely inside Hamlet’s head? What unfolds therefrom is a stripped down Hamlet-hallucination, during which the lead never leaves the stage, intruding himself into scenes into which he has no business intruding, behaving in ways both calculated and fantastical, unless shoving flutes down a friend’s throats is your norm. To be sure, this Hamlet is rooted in the script itself; after all, Shakespeare’s twist on the revenge tragedy was to make his hero inert, wrestling with being and action, conscience and emotional distress. This Hamlet simply takes that root and, like bamboo, makes it the forest. This Hamlet also depends on an audience that knows the play, at least if that audience has any desire to be tethered to reality. For when Claudius (James Whalen) and Gertrude (Sandy Bainum) suddenly step into the roles of the two gravediggers, with the elegant Ms. Bainum in pencil skirt and heels landing in Ophelia’s grave transformed into a toothless jokester, one can only imagine the nightmare Hamlet must be having.

The show and its host of characters are performed by Mr. Genebach and five other actors. The previously mentioned Ms. Bainum captures the essence of the caring mother too in love with her new husband to fathom the pain of her fatherless son, while Mr. Whalen’s charms beguile much the way a murderous Claudius’ might do. Plus, Raven Bonniwell (also a co-founder) as Ophelia transforms right before our eyes from love-smitten teenager to traumatized child, while Billy Finn’s duo of Laertes / Rosencrantz allows us to distinguish between the two even as he portrays the honor of both with subtlety and distinction. Finally, the bearded Gordon Adams portrays a host of characters, from Polonius and Priest to the Player King and Bernardo; though he could have added greater distinctions between the characters, he nevertheless delivers them “trippingly on the tongue.”

That said, there is nothing fancy about this production. The stage is bare, except for one large crate that triples as a bench, a wardrobe, and a coffin. There are no props save the occasional knife and handheld mirror. This Hamlet soars not only because of the power of the acting and, of course, the Bard’s gift of word beyond compare in the English-speaking world, but also because of the directorial choices that transform a bar’s tipsy “what if” into something quite wonderful indeed.

Advisory: this Hamlet is recommended for kids 13 and up, but be prepared for a frank discussion about trauma and violence.