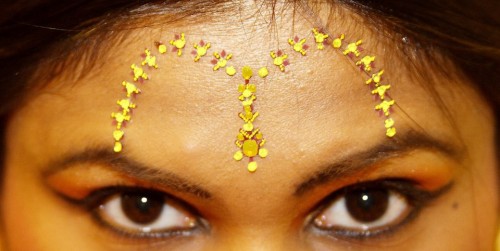 Part stand-up comedy, part immigrant family drama, part spiritual quest—McGoddess is Vijai Nathan’s comic exploration of what it means to grow up Hindu eating Big Macs beneath an All American Golden Arch. With only a video screen providing the occasional humorous visual behind her, or the infrequent musical rift lending a bit of ambiance, Ms. Nathan garners our attention with the delight found in her subtly ironic stories. Focusing on her small Indian family—mother, father, three sisters—she takes us from her birth in America by C-section, through tales of a cat-boy and a Chucky Cheese fiasco, ending with her father and his own nine-lives; and she has us laughing all the while.

… it has that truly agnostic acknowledger of all things doubt-ridden; and it’s that perspective that gives ‘McGoddess’ its wonderfully perceptive comic touch.

McGoddess, however, is not your HBO style comic stand-up with its over the top crudity, or your sitcom silly farce disconnected from reality. McGoddess is that prototypical crossover piece that miraculously doesn’t lose any of its authenticity because, even though Nathan’s family is all Indian complete with a bathroom Vishu, the world she paints for her audience is 100 percent American in its orientation. Her family has its traditional religious members, it has its born-again Christian evangelizing sister, it has its atheist Marxist scientific optimist, and it has that truly agnostic acknowledger of all things doubt-ridden; and it’s that perspective that gives McGoddess its wonderfully perceptive comic touch.

With McGoddess, Ms. Nathan has a story to tell, and she never lets the jokes get in the way of that tale. Instead, her humor serves her narrative, which at one level is a loving portrait of her family, but at another it is a quietly comic homage to her father and his willingness to question fundamental truths. And indeed, it is Ms. Nathan’s ability to blend impossibly paradoxical material and styles that gives McGoddess its tantalizing power. As Ms. Nathan presents what looks like your traditional stand-up comedy routine, we gradually become aware that each of these seemingly discreet jokes is actually a part of a larger narrative. As the show pokes fun at the religiously blinded or the culturally obtuse, it also prods us to question our own spiritual assumptions and fast-food choices. And finally, after we’ve grown accustomed to Ms. Nathan’s charms and to the laughs she invokes, we leave the theatre only to realize that we’ve been sincerely touched by a comic with a gift for crossing boundaries.

Warning: the show contains slight profanity and is not recommended for kids.