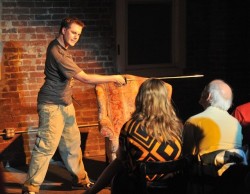 You know how, when you hear a lot of good buzz about a show going in, you say, “I hope it lives up to its hype.” Joe Brack’s one man show My Princess Bride does not only live up to its hype, it exceeds it ten times over.

Joe Brack is one of those talents that could read the phonebook on stage and it would be something. My Princess Bride is a one man retelling of the book The Princess Bride by S. Morgenstern that was ultimately turned into a very successful movie of the same name. Brack plays all of the characters that you remember: Buttercup, Humperdinck, Fezzick, and Montoya are all along for the ride. Brack’s characterizations are brilliant and no character is like the other. He also brings up the differences in the two versions of the story.

As if this were not enough Brack also tells us about his upbringing in Boston, how he fell in love with books as a kid, and how the movie has helped him through several events in his life. You say you want more? Brack even has a swordfight with himself.

The novel talks about a place called The Cliffs of Insanity which is very apropos because you have to be a bit insane to put this show up on stage.

…’My Princess Bride’ ranks as one of the best solo shows ever.

Because Joe Brack is such a monster performer, this show works really well. I shudder to think what would happen with a lesser performer trying this. It helps when you have a good collaborator, and Brack has director Matty Griffiths to guide him through this journey. By letting Brack’s endless energy come through, the show grabs you from Brack’s first entrance and holds you for the entire time.

The hardest thing for a performer is to go out on stage alone and do this kind of show. You are not playing against anyone and if you go up on your lines you have no help. Brack is totally comfortable in this format and because of this My Princess Bride ranks as one of the best solo shows ever. If you are a fan of the film you will recognize some of the dialogue, which you can say along with Brack. I highly highly suggest you see this show. It is up there with Hal Holbrook’s Mark Twain Tonight and John Gielgud’s Ages of Man. Do “as you wish,” but if you miss this show you will regret it forever.

Advisory: Recommended for kids 13 and up.  Contains profanity.