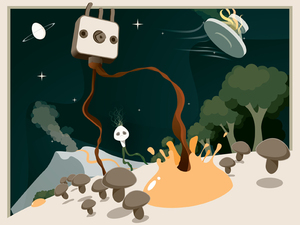 Planet Egg’s tag line says, “Like nothing you’ve ever seen!” Indeed it is. Puppet Cinema is a company that performs a puppet show that it presents as a movie. In other words, the puppeteers perform the show to your left in front of a video camera, and you watch what they do on a movie screen directly in front of you.

Puppeteers Zvi Sahar and Justin Perkins take us to Planet Egg through the use of a carousel like contraption that gives the illusion of a moving galaxy. When objects are placed in front of this galaxy, the show takes on the genre of one of those Saturday afternoon Lost in Space episodes.

This is a very impressive venture to watch; it even has its own sound effects or foley artist in the person of Ien DeNio.

The use of tiny objects and a whole lot of mushrooms make for an interesting show, and you get to see how it is done while it is being presented on screen.

The program says the show was supported by Cheryl Henson (Jim Henson’s widow). I can see why. This is the kind of stuff Jim Henson would definitely be proud of.

…a very impressive venture to watch.

One other selling point for this show is that Planet Egg is one of the few Capital Fringe shows you can bring your kids to without feeling guilty afterwards.

Planet Egg by Puppet Cinema shows off the art form of puppetry to its full advantage and in doing so it makes for an entertaining evening.

For remaining show times click here. For more info on everything playing at Capital Fringe through July 29th click here.