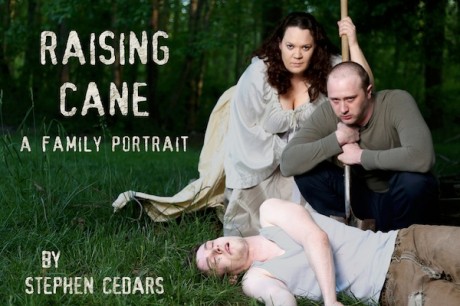 After watching Grain of Sand Theatre’s production of Raising Cane A Family Portrait, I came away asking one question; what is the show? Is is a drama, dark comedy, or a study in stage combat? The answer is: it’s whatever you want it to be. No matter what you get out of it one thing is clear, Grain Of Sand’s second production (Hamlet Reframed was the first and won Best in Fringe 2011) proves that this up and coming theatre company is going to make a big splash in the near future.

If I had to explain Stephen Cedar’s play to you, my explanation would be as follows: dysfunctional family with a really lascivious Queen Mother played with great vibrato and gusto by Sara Bickler, two sons that fight against each other to the death, and things that should not be done with pitch forks and frying pans. There is also something no Fringe show should be without; kazoo accompaniment. There is more, but I think I’ve peaked your interest.

Two thirds of this show is very complex fight choreography, which is under the watchful eye of Carl Brandt Long who also plays Billy in the show.

I give this cast extra points for shear endurance because this is a rough show to perform. There is a long challenge section between the two sons and John Stange as Saul, the Queen’s husband, gets a real workout as well. It is incredibly hard to put up this kind of show in a Fringe festival because of your time constraints, but director Christine Lange has risen to the challenge and her cast does a brilliant job of putting this quirky and physically challenging show over.

Raising Cane A Family Portrait brings up the fact that there are lots of small companies vying for attention in the DC theatre market. Grain of Sand Theatre Company’s track record is now two for two with me and I hope to see lots more from them in the future.

Advisory: not recommended for kids.