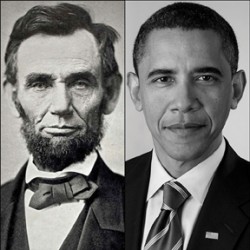 Within every teacher burns the performance artist.  Within every artist churns the desire to teach.  People have wrestled with the relationship between artist and teacher at least since Horace’s Ars Poetica.  Some have used art, and particularly theatre, as a vehicle to disseminate their vision—think Catholicism in the Middle Ages.  Others have used art to express their personal hopes and aspirations—think Woody Allen and Annie Hall.  Many theatre artists simply want to be entertainers, but unfortunately “the empty space” teaches no matter what they place in it.  So know that, when you sit down in Studio’s Milton Theatre to enjoy the world premiere of Mark Whitney’s Rightful Masters, the journey you are about to take leans heavily on the teacher / vehicle side of the above artistic equation.

Know that the only character you will meet is the author himself, and not a Stephen-Colbert-through-the-looking-glass version of self either.  Know that the journey you are about to take is not into this character’s heart and soul.  Unless of course, Mark Whitney has become America herself; for it is America’s heart and soul being visited this hour.  Whitney’s vision of America, which he admits that he’s still processing, deals with the law, the Office of the President, and the global war on terrorism, and the threat they pose to the American identity.

Whitney is personable… interacts with his audience to good effect… jokes, both on and off the cuff.

To be sure, Whitney has done his research.  Aided by a large television screen, video clips support and in many ways advance his lecture, which is convincing.   And he is not a partisan.  When it comes to our civil liberties and their erosion and loss, Republicans and Democrats alike continually place the interests of war and security above the preservation of these liberties.  Indeed, through their democratic vote, the American people seem to continually place their desire for safety above their desire to be free.

What Whitney has not done, and needs to do if he wants to speak to anyone beyond the choir, is magnify the performance artist burning within.  Whitney is personable.  He interacts with his audience to good effect.  He jokes, both on and off the cuff.  What his performance artist does not do, however, is let his audience take charge of the journey.  Bertolt Brecht—master playwright of the 20th century, who gave voice to the role of artist as activist—argued that the theatre artist must offer the audience the opportunity to discover; in that discovery is the joy that inspires participation.  If Whitney found a way, not to lead his audience where they may or may not want to go, but to facilitate his viewers’ discovery of the truth that his material has to offer, then he’d have a show much greater than the interesting lecture he now offers.

Advisory: recommended for kids 13 and up, for it contains some profanity.