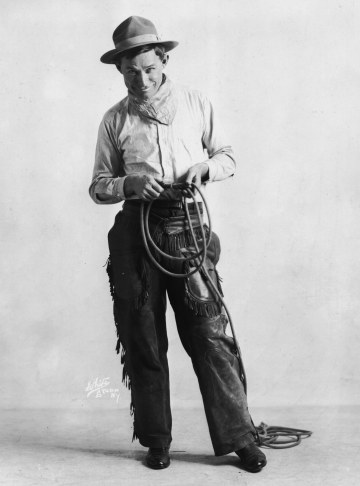 The real Will Rogers. Photo courtesy of the Will Rogers Memorial Museum, Claremore, Oklahoma.

Will Rogers is considered America’s greatest political humorist. He often said, “I’m not a member of any organized political party. I’m a Democrat.” Will Rogers’ U.S.A. celebrates this great man.

The show was originally performed by James Whitmore, who did it for 35 years as a full evening of theatre. Kaleidoscope Theatre Company, with the permission of producer George Spota’s daughter, has for the first time whittled the show down to 50 minutes with the hope of touring the show to schools.

This piece is not done very often; in fact, I only know of one other actor who has performed it other than Whitmore, and that was Paul Tripp, who toured the show in the early 70s. That’s because this script is a monster for any actor: he has to stand up in front of an audience and just talk without the aid of another actor.

As Rogers, Tripp Lloyd embodies Rogers’ likeable personality quite nicely in full western garb. It did, however, feel like Lloyd was having a hard time remembering his lines. I know Rogers worked off the cuff, and never knew what he was going to say before he got on stage, but Lloyd kept going back to his notes during the show making it obvious to the audience that this actor needed a cue. This might very well be a moot point, however, because director Rob Cork, and not Lloyd, will be playing the show for its last three performances.

…gives us a taste of Will Rogers at his best.

One of Rogers’s trademark bits was reading things out of a newspaper cold and coming up with a joke about it on the spot. My favorite of the night was “Why is it called traffic when it is almost never moving?” Priceless!

I also very much enjoyed Lloyd’s Calvin Coolidge impersonation while reading one of his speeches to both houses of Congress and asking the audience to snore for authenticity.

Even with Lloyd’s struggle for his lines, I did enjoy his performance and this show. It gives us a taste of Will Rogers at his best and a look into this great comedian and humanitarian.