Over the Line Festival at Round House Theatre

The 2012 Capital Fringe Festival is fast upon us, with its theatrically adventurous 133 different productions held in 18 different venues, some of which are as spatially adventurous as the shows they house. If you like that kind of adventurous theatre, but maybe not so much its Russian Roulette atmosphere—one out of every six shows really is deadly—now you have an alternative. From July 12 through July 29, The Round House Theatre is presenting its inaugural Over the Line Festival, a curated event that the theatre describes as a “unique celebration of theatre, music, and dance.”

Photo courtesy of Round House Theatre.

In many ways the Over the Line Festival is the perfect extension of what Round House Theatre has become known for over the years—a nurturer of many of the area’s young artists and companies. Indeed, that sense of artistic fellowship and community is what inspired the festival. Speaking about the idea of the festival, Danisha Crosby, Round House’s Associate Producer, said: “Many of us have talked about how exciting it would be to bring some of our favorite artists together under one roof at one time – and now the Over The Line Festival is creating the opportunity to do just that in Silver Spring.”

Many of the Festival’s 17 different productions are offered by faces familiar to Round House aficionados. Their resident companies—Forum Theatre and Contradiction Dance—will present several different performances. Forum offers Church by OBIE-Award-winning playwright Young Jean Lee as well as two Forum Re(Acts) in which, as the company says, they invite “local artists from multiple disciplines to create artistic responses to a specific prompt, topic, or theme.” Contradiction Dance, on the other hand, offers audiences The Gift, which was inspired by Shel Silverstein’s The Giving Tree, and Objects of Hope —a dance/theatre combination that dramatizes moments and things that allow people to rise above circumstances and succeed. In addition, Contradiction offers a performance of Homemade, a concert of pieces created in-house by the company’s dancers.

An important aspect of Over the Line is the performances it offers for the whole family. In addition to The Gift, mentioned above, Happenstance Theater is presenting Pinot & Augustine, a clown duo who elevate the circus’s physical comedy and verbal play to both the sublime and the ridiculous. On the other hand, Emma Jaster and Brianna Letourneau and company offer The Suitcase Story and Cinderella Confidential, respectively. Suitcase is a coming of age story that utilizes puppetry, mime, and music, while Cinderella is a wild retelling of the timeless love story, complete with cameos by Pinocchio and other celebrities.

Rounding out the Festival and its diverse array of styles are Clown Cabaret, on the nOse productions, dog & pony dc, Taffety Punk Theatre Company, and Helen Hayes winner Will Gartshore, as well as Emmy-award-winning storyteller Jon Spelman and Tina Chancey. These presenters add more clowning, more dance, more music, and even a little deconstruction of Shakespeare and Tolstoy to the mix, giving audiences a wide variety of shows from which to choose every single day. 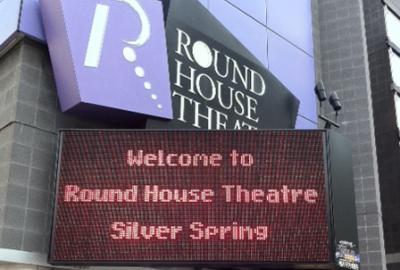 So if you have a hankering for a bit of theatrical variety, you might want to cross over the line into Silver Spring—or, if you’re coming from the other direction—stop just short of the District line, and see the latest addition to the Washington area’s robust theatrical landscape. It’s happening for the rest of July at Round House Theatre, Silver Spring, 8641 Colesville Road (next to the AFI Silver Theatre, across from the Fillmore).

Tickets for performances in the Over The Line Festival are $15 ($10 for Round House subscribers, senior citizens, patrons age 30 and under, and groups of 10 or more).

For more information about shows and schedules and to buy tickets go online or call 240-644-1100.