Over The Line Festival Review: ‘The Golem’ 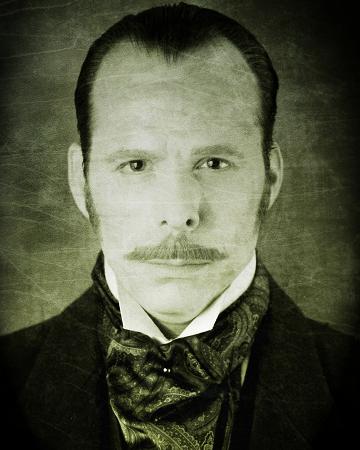 Daniel Flint in ‘The Golem.’ Photo by Philip Burnett.

The Golem was a novel written by Gustav Meyrink and was published in 1915. The story deals with the life of Athanasius Pernath, a jeweler and art restorer who lives in the ghetto of Prague. Pernath’s story is experienced by an anonymous narrator. During a visionary dream, however, the narrator assumes Pernath’s identity thirty years before. This dream was perhaps induced because he inadvertently swapped his hat with the real Pernath’s. While this might make an interesting read, the material comes off as being a little dry when presented on stage.

This is not to say that the always inventive Taffety Punk Theatre Company did not make a noble attempt at transforming the prose into a theatrical piece, because they did.

Daniel Flint (Adaptor and co-Director with Joel David Santer) turns in a knockout solo performance. Yes, you heard me, Flint plays all of the characters in the show and does so with great energy and vibrato. He is backed by the musical stylings of a very talented musician named Jupiter Rex. The soundtrack has an “other” worldly quality to it and is not what you’d expect to hear with this material.

Flint’s performance is well worth your time…

Chris Curtis’s lighting was far above anything I’d expect in a festival set up. Real area lighting and specials were used to full advantage and Flint performs in period costuming designed by Amy-Carr Taylor.

Taffety Punk and Daniel Flint did everything they could with this material and did so very professionally. Flint’s performance is well worth your time and in the process you are supporting one of DC’s most inventive—and different—theatre companies.

The Golem has one more performance this Saturday July 21, 2012 at 10:30 pm as part of Round House Theatre’s Over the Line Festival, now playing at its Silver Spring location, 8641 Colesville Rd. Silver Spring Maryland. To order tickets click here.